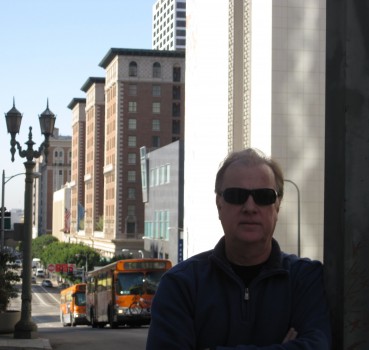 That’s me, to the right, standing in downtown Los Angeles. Behind me is the Biltmore Hotel, a renowned building for the crime and thriller writers of my city. The Biltmore was the last place Elizabeth Short, better known as “the Black Dahlia,” was seen alive. She swayed out the front doors one dark night and turned right on Olive Street. The next time she was seen she was in sections, in a little park in South L.A.

Los Angeles is the great noir city. It’s a district of dreams and demise (the perfect short-form obit for poor Betty Short). And it’s not just a city of the night. Bad things happen in sunshine and shadow, too, making the whole place a fertile soil for Bunco artists, swindlers, thieves, gamblers, and killers––not to mention politicians, cops, lawyers, and doomed lovers.

That’s why I like to hang out downtown. There’s the heartbeat of criminal history here, a pulse of dread possibilities. Anything can happen in L.A. You just have to open your eyes and ask What if?

So I walk around, ask, and think about it over some chop suey at the Grand Central Market. 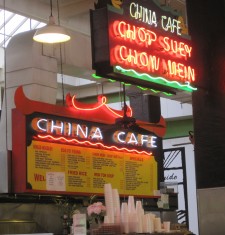 Which happens to be right across the street from Angels Flight.

Which I saved. Allow me to explain.

This iconic funicular, see below, was built in 1901, mainly to carry women from the steep, fashionable climes of Bunker Hill down to the shopping district of the burgeoning city. It remained a fixture through the area’s inevitable decline, faithfully maintaining its daily rounds.

In the early 1960s the city fathers were going to tear the whole thing down, but my dad—an L.A. lawyer whose mother used to take him on Angels Flight—joined with other citizens in a bid to save the landmark. He even had his young son offer an opinion to the news media. “It’s funner than Disneyland,” said the cute towhead on live television, obviously turning the tide. Angels Flight remains. You can thank me later.

Right around the corner, at Spring and 3d, is where the Stimson Building used to be. A killing took place here in 1899 that turned into the first of L.A.’s characteristic high-glitz trials. 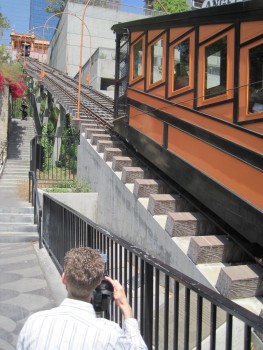 Jay Hunter, a handsome aristocratic Southerner, had came to L.A. to make his fortune. He romped with high society, dressed to the nines, and rocked an ornamental cane.

Hunter hired handyman William Alford for some plumbing work, then refused to pay Alford’s bill of $102.

Alford confronted Hunter at the latter’s office in the Stimson, threatening to post flyers all over town that said Jay Hunter Refuses to Pay His Debts.

No one saw what happened next, but several heard a gunshot and came out of their offices to find Alford holding a gun. Hunter was on the ground, next to his shattered cane, with a bullet in his belly. He later died of peritonitis.

Alford was charged with first degree murder, and high society wanted him hanged. A young, untested lawyer took on Alford’s defense for a fee of $100. This lawyer would go on to become perhaps the greatest trial lawyers of all time—Earl Rogers. 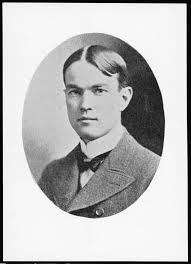 At trial, the audacious Rogers produced a glass jar containing the intestines of the decedent. As the jury gasped, Rogers called a medical expert to the stand, who testified that the trajectory of the bullet showed that Jay Hunter had been hunched over William Alford (who claimed Hunter attacked him with his cane).

Alford was found not guilty, the city went crazy, and the stage was set for sensational acquittals of the future, from Errol Flynn to Robert Blake to a Hall of Fame running back from USC.

Justice is not always sure, nor swift, in the City of Angels.

From downtown, head in any direction and eventually you’ll run into a famous crime locale. Go west, and you might pass the spot where Biggie Smalls got iced by a drive-by shooter. Keep going to Beverly Hills, where Bugsy Siegel received his final summons. Both killings remain unsolved.

From there it’s a brief jaunt to where two rich kids, Lyle and Erik Menendez, shotgunned their parents. They didn’t get away with it. Nor did Kenneth Bianchi and Angelo Buono, the Hillside Stranglers, or Richard Ramirez, the Night Stalker. And of course, the scariest of all because he held such sway over his followers––Charles Manson. I was here for all of them, feeling the chill blade of unease like the rest of my fellow Angelenos. 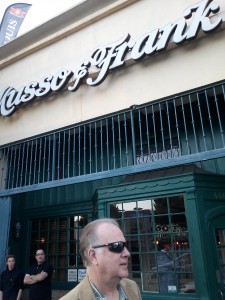 I like to finish up my L.A. research at Hollywood’s oldest eatery, Musso & Frank (note: not Musso & Frank’s). Sit at the bar where Chandler and Hammett and James M. Cain sipped martinis, or take a booth that probably felt the buns of Gary Cooper, Clark Gable, Joan Crawford, and that crowd.

Which reminds me that it’s just a short drive to the Sunset Strip and the alley where poor Sal Mineo, an actor I always liked and who was just starting a comeback, was knifed to death by a pizza delivery man.

For the writer, of course, this is all material.

All three of the books in my Ty Buchanan legal thriller series had their genesis with a Los Angeles news item, my favorite being the drunk driver pulled over on Hollywood Boulevard one Christmas night. He was 6’8”, hammered to the heavens, and wearing only a G-string and a Santa hat.

This, I thought, has to be Ty’s next client.

And so he was. 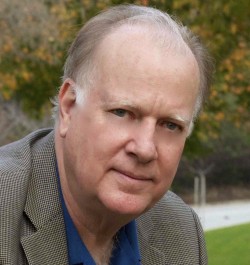 James Scott Bell is a bestselling thriller author and writing instructor. His Plot & Structure (Writer’s Digest Books) is the #1 writing craft book of the last decade. An ITW Awards finalist, Jim’s latest L.A.-based thriller is Romeo’s Rules. He will be teaching a class on dialogue for ITW’s Online Thriller School, March 14th thru April 29th, 2016. Visit his website at www.JamesScottBell.com