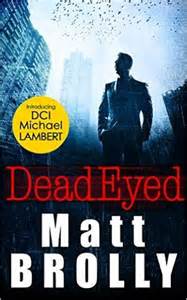 Yet when he’s passed a file detailing a particularly gruesome murder, Michael knows that this is no ordinary killer at work.

The removal of the victim’s eyes and the Latin inscription carved into the chest is the chilling calling-card of the ‘soul jacker’: a cold-blooded murderer who struck close to Michael once before, twenty-five years ago.

Now the long-buried case is being re-opened, and Michael is determined to use his inside knowledge to finally bring the killer to justice. But as the body count rises, Michael realises that his own links to the victims could mean that he is next on the killer’s list…

“DCI Lambert is a fantastic character –he has his flaws and he is typically ‘haunted’ but he also is very likeable, believable and remains true to his character throughout the book.”

“Dead Eyed is a gripping thriller, an excellent debut novel. Think James Bond meets Inspector Rebus meets the Da Vinci code and you have some idea of what kind of book it is.”

Following his law degree where he developed an interest in criminal law, Matt Brolly completed his Masters in Creative Writing at Glasgow University. He reads widely across all genres, and is currently working on the second in his Michael Lambert thriller series. Matt lives in London with his wife and their two young children.

You can find out more about Matt at his website or by following him on Twitter (@MatthewBroll).