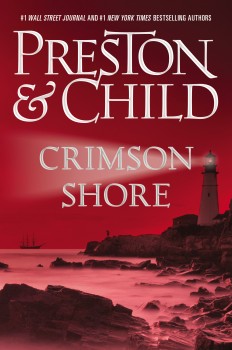 They say writing is a lonely profession. A writer sits in a room with only a computer and imagination. But it doesn’t have to be that way. Once in a while two writers join forces and produce tremendous work. And so it is with the acclaimed duo of Douglas Preston and Lincoln Child. They’ve co-authored New York Times bestselling thrillers for years, including the Agent Pendergast series. Next month the FBI agent extraordinaire is back in CRIMSON SHORE. In this story, Pendergast, New Orleans born and bred, takes the alluring Constance Greene to a town in Massachusetts. The story begins with the theft of a rare collector’s wine, but quickly expands into a mystery that weaves back to an earlier century.

Since I really can’t elaborate any more without giving away the plot, let’s see what Mr. Preston and Mr. Child have to say about their latest novel.

How did the idea originate?

We wanted to write a book with a similar feel to our earlier Still Life With Crows, in which Agent Pendergast is placed in an unusual and alien environment far out of his comfort zone, where he finds himself essentially a fish out of water. A charming New England setting, which Doug and I are both familiar with, immediately suggested itself as a good possibility.

What’s new for Agent Pendergast in this novel?

This story is more like a Sherlock Holmes tale than our usual novels, in that Pendergast takes on a private for-hire case. Of course, things very quickly begin to get out of hand…

What kind of research did you have to go through for CRIMSON SHORE?

I can’t answer that in too much detail without spoiling things, but suffice it to say that we had to give the Salem witch trials a pretty close look. As I allude to above, we’re both familiar with the New England coast, so the particular setting of CRIMSON SHORE—the fictitious town of Exmouth, Massachusetts—was relatively easy and fun to both assemble and describe.

What can you tell us about the antagonist? Without giving away the ending, of course.

Alas, I don’t mean to be coy, but anything we say about the book’s ultimate antagonist will completely give away the ending! (And readers of our earlier Pendergast stories may well get an idea about who the final bad guy is simply by my stating that.)

Currently a novel featuring our other series character, Gideon Crew. Interestingly, this story will also be a sequel to a book we wrote quite some time ago—The Ice Limit. We thought it would be fun to both write the sequel that many readers have been demanding for years, while making it a Gideon Crew story, as well.

Your Facebook page recently showed an article about a lost city in Honduras. Is there a plan to include some of it into a future novel? (I’m Honduran, still live in San Pedro Sula in fact, so you can say I’m really interested in this one.)

Doug had an amazing experience searching for the legendary “City of the Monkey God.” This adventure will feature in future non-fiction projects of his and—who knows?—perhaps in our joint fiction, as well.

Around the release of Relic in 1995, you explained your writing method. Has that changed over the years?

The way we write books together has changed significantly. Originally, Doug wrote most of the first drafts, while I outlined the chapters and conceived the general story arc. These days we are both more involved in all aspects of the process—conception, development, outlining, writing, and rewriting.

What has been the most troublesome book so far? The one you thought it may never be finished.

The most troublesome book in terms of never being finished was a book that never was finished. It was to be titled Hex, about a deadly computer hacker, and we wrote about the first third of it before a film came out on precisely the subject we were writing about. As a result, we had to reluctantly abandon the project.

How do you select an idea for a solo project, a stand alone or a series?

There’s no hard and fast rule for how we select our ideas. Most frequently, we brainstorm ideas for new books until one we both like suggests itself, then we fine-tune that until we’re happy with it. Often, ideas for new books will suggest themselves out of novels we are currently writing or have just completed.

The vocabulary in CRIMSON SHORE seemed elevated, with more words of uncommon use. Was this intentional or something that grew organically?

Readers tell us that all of our books have them reaching for their dictionaries now and then. 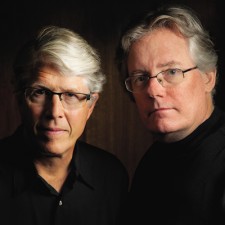 Douglas Preston and Lincoln Child are the authors of over twenty co-written books and have created a legacy with their storytelling. Chosen by readers in a National Public Radio poll as one of the hundred greatest thrillers ever written, Relic was made into a number-one box office hit. The Cabinet of Curiosities was also chosen in this coveted category. Anne Rice, Lee Child, and Steve Berry have praised their work, in addition to many others, and their fan base continues to grow at a rapid rate. In addition to his novels, Preston writes about archaeology for the New Yorker and Smithsonian and Child is a former book editor who has published five books of his own, including the wildly successful Deep Storm.

To learn more about Douglas Preston and Lincoln Child, please visit their website.