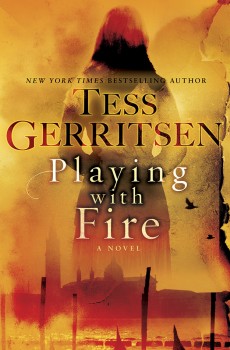 Story inspiration can come from anywhere—a news clipping, a random conversation with strangers, a slash of graffiti.

For international bestselling author Tess Gerritsen, the creative spark for her latest release, PLAYING WITH FIRE, struck while touring the centuries-old Venetian Ghetto. There, the story of Julia and Lorenzo came to her with such force, she composed a haunting piece of music that not only guided her in writing this novel, but also wove itself deep into the story’s theme.

The book centers on accomplished violinist Julia Ansdell, who discovers the “Incendio Waltz” in a darkened antique shop in Rome. But every time she plays the complex and unusual piece, it seems to inspire her young daughter to commit acts of violence.

“Usually we say that music soothes the savage beast,” Gerritsen says. “But in this case, it brings out the beast.”

Not that anyone believes Julia. Despite numerous incidents, Julia’s husband, her friends, doctors, and even her appointed therapist can’t understand how a toddler could hurt anyone, let alone her own mother.

To save her family—and perhaps her own sanity—Julia must uncover the origin of “Incendio.” Her journey takes her into the heart of Venice where she uncovers a dark secret that dates back to the horrors of World War II, and reveals the tragic love story of a 1940s Jewish violinist, Lorenzo Todesco.

Told in alternating past and present points of view from both Julia and Lorenzo, PLAYING WITH FIRE is a powerful thriller about love and music during some of history’s darkest moments. It is also unlike any of Gerritsen’s previous stand-alone thrillers or the novels within her popular “Rizzoli & Isles” series—a risk, perhaps, but one she felt compelled to take.

“It’s always scary to do something different than from what readers expect,” she says. “But I had to write the book. I felt like I was drawing from a different voice.”

The novel’s unique structure and genesis aren’t the only unusual aspects . While Gerritsen admits she learned to play the violin as a child, she considered music a hobby or additional creative outlet. Surprising even to herself then, that Gerritsen composed “Incendio” in just six weeks. The resulting music is far more complicated than anything she could ever play.

Performed by the amazing violinist Yi-Jia Susanne Hou on a 1739 Guarneri violin, Gerritsen’s full seven-minute composition was studio recorded and is now available for download on iTunes and various other retailers.

Described as a mournful waltz, the music accelerates in tempo and climbs in a series of arpeggios high “into the stratosphere.” Like the thrillers she is most known for, the melody twists and turns, transforming into a “malevolent” piece, harsh with augmented fourth chords.

“Once I got the melody down, I tried to be very analytical,” she says. “I wanted to build on it to create something disturbing. I added several Devil’s Chords—I love that word—which is essentially two notes that are very jarring on the ears.”

A successful and satisfying experiment, though not one Gerritsen feels she’ll ever be able to repeat. “I don’t think the universe will give me this gift again,” she admits.

With Gerritsen, one never knows. Though she’d always dreamed of writing, she first pursued a medical career, securing a profession she knew would make her Chinese/American father proud. But like most writers, she harbored a secret dream to be an author, and once established in the medical community, she began to dip her feet in literary waters.

Sadly, her father developed Alzheimer’s before her writing career really took off, and so he never had the chance to appreciate his daughter’s creative spirit. In honor of him and the millions of people who suffer from Alzheimer’s every day, Gerritsen created a campaign to raise funds for research on the disease.

“Almost everyone has lost somebody to Alzheimer’s,” she says. “We all know how painful it is, and the repercussions for the rest of the family. We’re all getting older and it is alarming how little of our federal funds go into Alzheimer’s research. This disease is going to take down our economy.”

The 2013 War on Alzheimer’s campaign raised more than $50,000 in donations using incentives such as a chance to win naming rights in Gerritsen’s novel Die Again, published in December 2014. Fans who contribute to this year’s campaign will win the opportunity to name characters in her next Rizzoli & Isles novel, set for release in 2016. Proceeds from the campaign will be donated to the Scripps Research Institute.

“Watching my father lose his identity as he struggled with Alzheimer’s is the most devastating experience our family has been through,” Gerritsen says. “Every dollar counts.”

To join the War on Alzheimer’s, Gerritsen invites fans to contribute via the campaign’s fundraising page by clicking here.

Internationally bestselling author Tess Gerritsen took an unusual route to a writing career. A graduate of Stanford University, Tess went on to medical school at the University of California, San Francisco, where she was awarded her M.D.

While on maternity leave from her work as a physician, she began to write fiction. In 1987, her first novel was published. Call After Midnight, a romantic thriller, was followed by eight more romantic suspense novels. She also wrote a screenplay, “Adrift”, which aired as a 1993 CBS Movie of the Week starring Kate Jackson.

Her books have been top-3 bestsellers in the United States and number one bestsellers abroad. She has won both the Nero Wolfe Award (for Vanish) and the Rita Award (for The Surgeon). Critics around the world have praised her novels as “Pulse-pounding fun” (Philadelphia Inquirer), “Scary and brilliant” (Toronto Globe and Mail), and “Polished, riveting prose” (Chicago Tribune). Publisher Weekly has dubbed her the “medical suspense queen”.

Now retired from medicine, she writes full time. She lives in Maine.

The November 2015 Edition of The Big Thrill