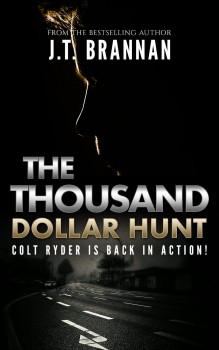 Colt Ryder is the Thousand Dollar Man, an ex-military vet who wanders America from one town to the next, helping those in need. Travelling only with his dog Kane, he is willing to do the jobs nobody else can – and all he asks for is one thousand dollars a time.

Laguna, New Mexico – A game reserve and safari park mimicking the African savanna – complete with lion,elephant and rhino – has been set up in seventy square miles of ranch land by General Roman Badrock, a retired US Army officer with a passion for wildlife.

When Colt Ryder is asked to track down a missing person, the trail leads to Badrock’s ranch; and when the general takes Ryder in and gives him a job, it soon becomes obvious that a family-friendly safari park isn’t all that is on offer there . . .

Big game hunting for big money occurs after dark, with people willing to pay tens of thousands of dollars to kill the park’s large animals.

But as Ryder discovers, General Badrock’s plans don’t stop there and he soon discovers himself caught up in the park’s most elite sport – the hunting of the world’s most dangerous game.

And this time, the Thousand Dollar Man himself is the prey.

THE THOUSAND DOLLAR HUNT is the second novel in the bestselling Colt Ryder series, and is another breakneck adventure tale that will take your breath away!

THE THOUSAND DOLLAR HUNT is available from Amazon and Amazon UK.

‘What an absorbing, rollercoaster of a read.’
Elly Griffiths, winner of the Edgar Award for THE CROSSING PLACES (book one of the Ruth Galloway series)

‘Origin is a truly original novel, seamlessly meshing a modern high-tech chase thriller, stuffed full of guns and gadgets, with elements of ancient history to produce a book that’s both thought-provoking and relentlessly exciting.’ James Becker, bestselling author of THE FIRST APOSTLE

‘ORIGIN is a thrill a minute ride of a book.’ Simon Toyne, bestselling author of SANCTUS and THE KEY

‘Smart, sophisticated and thrilling, ORIGIN drags you in and makes you hold your breath right to the last lung bursting page.’ Sam Christer, bestselling author of THE STONEHENGE LEGACY and THE TURIN SHROUD SECRET

J.T. Brannan is the author of the Amazon bestselling political thriller series featuring Mark Cole (PLEDGE OF HONOR, NEVER SAY DIE, BEYOND ALL LIMITS, WHATEVER THE COST and STOP AT NOTHING), as well as the high-concept thrillers ORIGIN (translated into eight languages in over thirty territories) and EXTINCTION (his latest all-action novel from Headline Publishing), in addition to the sci-fi action short story DESTRUCTIVE THOUGHTS.

Trained as a British Army officer at the Royal Military Academy Sandhurst, before deciding to pursue a writing career, he is a former national Karate champion and bouncer.

He now writes full-time, and teaches martial arts in Harrogate, in the North of England, where he lives with his wife and two young children.

He is currently working on the next novel in the bestselling Mark Cole series, as well as further books in the all-new Colt Ryder series.