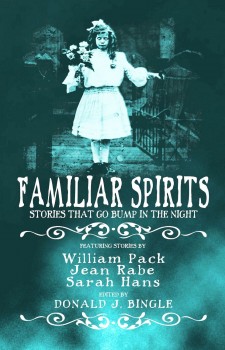 An anthology of ghostly tales just in time for Halloween.

Magician and story-teller William Pack conceived of Familiar Spirits as an outgrowth and supplement to his spell-binding performances of magic and ghostly tales. Connecting with Writer on Demand Donald J. Bingle, they have invited a specially selected group of extremely talented writers to craft short tales and vivid manifestations to unsettle, spook, terrify, and haunt you in your dreams and in brightest day.

Sometimes when the dead are laid to rest in peace, they refuse to go into that dark night.
Instead, they lie in the cold earth, agitated and restless, angry about the past, conjuring up lists of wrongs to right and enemies to fright.

And, you will meet a mother who refuses to abandon her child … a jealous ex … a sailor who seeks to escape his watery grave … and your deepest fears.

What makes ghost stories give readers shivers more than any other stories? After all, vampire and werewolf and monster tales can be plenty creepy, too. Perhaps it’s because we always know, deep in the back of our subconscious, that vampires and werewolves and monsters aren’t real. They’re fiction. But, the same isn’t true for ghost stories. Almost every culture believes in ghosts and has myths and tales about them. Almost everyone has had, or personally knows someone who has had, a ghostly or supernatural experience. We believe in ghosts, so we believe in ghost stories. And that makes it so much harder to go to sleep after we’ve read what those familiar spirits may be up to in the midst of deepest night in the woods, down the street, and in our own homes.

Join with these authors to bring Familiar Spirits to life … or, perhaps, unholy afterlife from beyond the grave. Death is only the beginning for a familiar spirit, but it may be the end for those it seeks out on the mortal plane.

FAMILIAR SPIRITS is available from Amazon and Barnes & Noble.

Editor Donald J. Bingle is the author of five books (The Love-Haight Case Files; Frame Shop; Net Impact; GREENSWORD; and Forced Conversion), as well as of about fifty short stories in the thriller, horror, mystery, science fiction, fantasy, steampunk, romance, comedy, and memoir genres, many of which have been reprinted in his Writer on Demand series. He is also the author of the award-winning humorous short memoir, “Father’s Day,” and the Christmas Carol Critique Collection (Season’s Critiquings; Merry Mark-Up, and Holiday Workshopping). He is a full member of the ITW, HWA, SFWA, and IAMTW.

Succession of Power by Tom Berreman