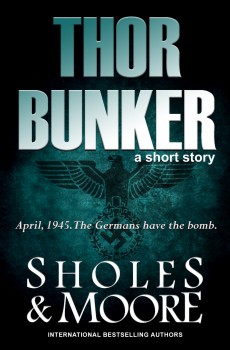 April, 1945. The Germans have the bomb. In a desperate attempt to win the war, Hitler plans to drop an atomic bomb on the city of London. That all ends with his suicide. But the scientist who developed the Nazi bomb has other plans. THOR BUNKER, A Short Story is a prequel to the Kindle bestselling thriller, THE BLADE, and includes an excerpt.

THOR BUNKER is available from Amazon.

Lynn Sholes & Joe Moore are the #1 Amazon and international bestselling authors of THE GRAIL CONSPIRACY and THE PHOENIX APOSTLES.