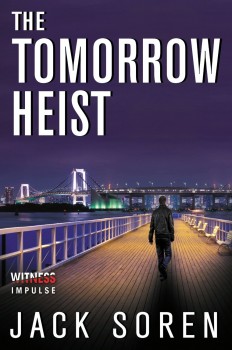 Readers looking for twisting, fast-paced suspense will be swept away by Jack Soren’s newest tale of thrilling international adventure…

Jonathan Hall and Lew Katchbrow intended to leave life as international art thieves behind them—if only the money hadn’t run out. But when a shadowy organization approaches the duo offering compensation, protection, and prestige in exchange for their skills, Jonathan and Lew think it’s the answer to their problems…
But the nightmare has only just begun.

Suddenly Jonathan and Lew are thrust headlong into a race against time and a technology that science says shouldn’t exist. With the very nature of life and death on Earth hanging in the balance, it’s up to them to discover the truth behind Ashita—a terrifying futuristic city in the depths of the Pacific Ocean—and stop it. But the clock is ticking. If Jonathan and Lew fail this heist, millions will die—and the human race will never be the same.

THE TOMORROW HEIST is available from Amazon, Barnes & Noble and HarperCollins.

Jack Soren was born and raised in Toronto, Canada. Before becoming a thriller novelist, Jack wrote software manuals, drove a cab, and spent six months as a really terrible private investigator. His debut novel, The Monarch, was nominated for the Kobo Emerging Writer national book award and the Silver Falchion Reader’s Choice Award. He lives in the Toronto area.