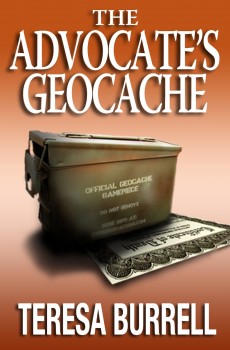 Attorney Sabre Brown is having a great time geocaching, the Internet’s version of a treasure hunt. The fun ceases when she “caches” a container with an official death certificate citing “Murder by Poison” as the cause of death. Even more disturbing is that the date of death is ten days in the future.

Sabre is forced to search cache after cache, each revealing more clues, until they take an unexpected twist and shockingly point to one of her court cases. Is the murderer a rejected child, a well-known plastic surgeon, a scorned ex, a crooked lab technician, or a politician in line for the highest office in the land? Or is someone playing Sabre in an ugly geocache of life and death?

THE ADVOCATE’S GEOCACHE is available from Amazon.