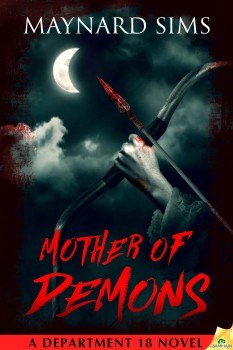 By The Big Thrill staff

MOTHER OF DEMONS is the sixteenth novel of the writing pair Len Maynard and Mick Sims, who publish as Maynard Sims. It is their tenth supernatural novel and sixth with Don D’Auria at Samhain.

Many of your novels revolve around the mysterious Department 18. Tell us about that.

Department 18 is a secret unit of the British government that investigates paranormal and supernatural events in the UK but also globally. It had its own website before it was mysteriously hacked, perhaps a jealous competitor or, perhaps, dark forces in high places. Now its secrets lurk within the author website at www.maynard-sims.com, where there is a full history and some case files for review. MOTHER OF DEMONS is a Department 18 novel.

The series ranges far and wide. What can you tell readers about the earlier works?

Department 18 series kicked off with Black Cathedral. The book introduced Robert Carter and the team, led by Simon Crozier. Investigating the disappearance of a corporate management team lost on a bonding weekend on a deserted island leads to the chase and eventual battle against a 400-year-old satanic alchemist called deMarco.

Night Souls continues the Department 18 story with a quest to vanquish psychic sexual vampires. What begins as a seemingly routine poltergeist investigation leads to the discovery of the Breathers, a species of vampire-like creatures that feed on human souls. They have evolved over the centuries and now are split into two warring factions. Both are a threat to mankind.

Book 3 is The Eighth Witch. Robert Carter is on vacation. Invited by his long-time friend, Annie Ryder, to her house in Ravensbridge in the north of England, he is planning some seriously needed downtime. Annie has other ideas. A series of unexplained deaths over the past eleven years and the recent unexplained disappearance of a good friend have convinced her that there are evil forces at work in Ravensbridge. She asks Carter to investigate. Despite his initial reluctance to get involved, when a visiting history professor is subjected to a demonic attack and left hospitalized, Carter realizes he has no choice but to investigate. It becomes evident that the series of gruesome and bizarre deaths are related and being orchestrated. There were seven witches hunted and killed, and the eighth is out for revenge.

A Plague Of Echoes, book 4, continues the theme of police involvement in Department 18 investigations. The clock is ticking. In London, Department 18 chief Simon Crozier is brutally stabbed and left for dead. Billionaire businessman Pieter Schroeder has laid his first card in a deadly, high-stakes game. The secret past of Department 18 comes back to haunt the present day. Whether Crozier lives or dies, whether Department 18 has a future, is in the hands of a few. In a battle against an evil both ancient and modern, Robert Carter and his team has to play the winning hand, where immortality is the ultimate prize, and death is dealt to those who lose.

Which brings us to the latest entry.

Yes, MOTHER OF DEMONS has been described as a mix of supernatural and crime. The hunt is on. As the death toll rises Department 18 has to track down the killers. Who are they? Is it a violent cult practising satanic rituals under homage to demons and black magic? Or is it something far more deadly? Perhaps the Goddess of the Hunt, Artemis, who fires invisible but lethal arrows to kill her victims, and who summons the spirit of a bear to perform her commands? Can Department 18 survive intact? Is there any way they can find and stop whatever madness has taken over their world?

Click here for a free short story, “Assignment,” and here to watch the book trailer for MOTHER OF DEMONS. 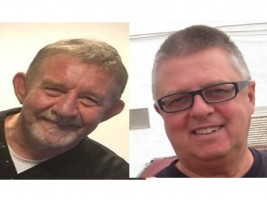 Len and Mick have been writing together for a long time. We met in 1964, aged eleven, at Ambrose Fleming Technical Grammar School in Ponders End, Enfield. We weren’t friends immediately, that came later, when, aged 18, we had left school and started work – Len as a lapidary in London and Mick for Lloyds Bank. Len left after 43 years, Mick left after 40 years – we do things for the long haul. We began to talk one night, in the bar of the Crown & Horseshoes pub in Enfield, went for a long walk after closing time, and a life time of friendship was born.

Mick is married to Clare, Len isn’t married to anyone any more, and there are two children between us, Iain Maynard and Emily Sims, and two grandchildren, Elizabeth Maynard and Macie Sanchez-Sims. We both live in Hertfordshire, about 25 miles apart.