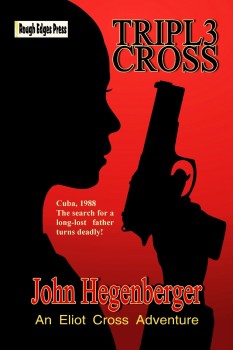 It’s 1988, and small-town P.I. Eliot Cross is searching for his long-lost father. Then, a CIA informant says that Dad has been in deep cover for over twenty years. Now, the informant’s been murdered and Eliot is on the run.

Scrambling to clear his name, Eliot journeys from Washington D.C. to Havana, Cuba, struggling against deadly drug-runners, syndicate hit-men and his own violent nature. But the worst is yet to come, as Eliot discovers his father is at the center of an international conspiracy, a nuclear threat and a double cross…or is that a triple cross?

Veteran author John Hegenberger spins a yarn that is both an exciting thriller and a compelling piece of “noirstalgia”, expertly recreating a sense of late-Eighties paranoia and double-dealing and painting a vivid picture of Washington and Cuba during that era, as well as saving a shocking twist for the very end. TRIPL3 CROSS is pure reading entertainment.

TRIPL3 CROSS is available from Amazon.

“In TRIPL3 CROSS, John Hegenberger skillfully blends elements of the traditional PI genre with those of an espionage thriller and comes up with an exciting, entertaining tale sure to please a wide spectrum of readers. Eliot Cross is a tough Columbus, Ohio PI with depth and complexities beyond the norm. At the core of his hard exterior and too-quick temper is the emptiness he feels over a father long thought dead. What ensues after he learns that his father may actually still be alive, makes for a fast-paced thrill ride that propels Eliot relentlessly in search of the truth, all the while dodging the Syndicate, the CIA, and ultimately Castro’s thugs in the heart of 1988 Cuba. A great debut for a protagonist readers are sure to want to see more of!” – Wayne D. Dundee

It’s 1988, and when p.i. Eliot Cross finds out that his father didn’t die the way Cross had been told long ago, Cross decides to find out the truth. He winds up in Cuba where nobody wants him to be, and he discovers not only the truth about his father but about secrets that others would rather have hidden. It’s a fast-moving tale of mystery and espionage that will engage you right from the start. Check it out. – Bill Crider

“John Hegenberger seems to have effortlessly crafted a novel that whizzes around the globe yet retains its small town Columbus roots. It is 1988, the Wall has yet to fall and the world is a very different place. Mr. Hegenberger makes it his own in TRIPL3 CROSS, which will take you back to the excitement of the Cold War days.” – Patricia Abbott

“TRIPL3 CROSS is a small book that packs an awfully big punch. Hegenberger brilliantly captures Cross’ voice and pulls us intimately into his adventure until the very end where he pulls off a dandy O’Henry style twist that had this reviewer crying, “Bravo!” This is a damn good read by a pro. Spy buffs will not be disappointed.” – Ron Fortier