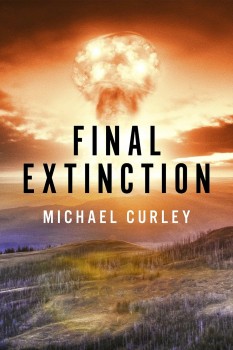 Mustafa al-Khalid is the only child of a very wealthy Turkish family. Through his exclusive boarding school in Switzerland and university in Munich, he is shunned by other Moslems because the source of his family’s wealth is alcohol. They own the largest brewery in Turkey. His ostracism pushes him to study Islam where he meets and proposes to Jasmine, the only person he has ever loved. At their engagement party Jasmine, her family and most of his family are killed by a Hellfire missile fired from a U.S. Navy drone. Jasmine’s father was the head of the Moslem Brotherhood. Five other members of the high council were also present and killed.

As Mustafa slowly recovers from his own serious wounds, the Brotherhood make an easy convert of him. But he’s not going to waste himself or his money on suicide bombings or even massive attacks like 9/11. Instead, he is going to create the ultimate act of terrorism, the ultimate form of suicide: he is going to end the world!

As he learns the tradecraft of terrorism, he recruits radical German scientists, sells the Turkish brewery, and buys one in Russia from some generals who command tactical nuclear forces. His team buys a nuclear warhead from two colonels with a UN Disarmament Inspector from India as their accomplice. They smuggle the bomb into the US with the help of a County Sheriff in New York. They recruit a park ranger in Yellowstone who needs money and a new identity.

This crisis lands on the desk of Agent Michael Cornell of the FBI. All he has to go on are reports from their Russian counterpart, the FSB. The Russians caught the payments to their two colonels and the UN Inspector. They tortured the colonels to death and threatened the Inspector. They passed on what they learned to the FBI. It wasn’t much. And it was crazy. Was it really heading to the U.S., or was it targeted for Israel? Why ship it by boat – an almost 2-week journey? Why not by air? If it were coming to the U.S., where were they going to detonate it? Nothing made sense.

As the days tolled, Agent Cornell found himself working with the Chief of Naval Operations, a very attractive 43-year old blond, who got the job because she was the “father” of the “CyberNavy.” Together Agent Cornell and Admiral Molly McNamara electronically sweep the North Atlantic looking for the ship carrying the bomb.

The U.S. Geological Survey is certain that the bomb is destined for San Francisco where it would not only flatten the city but would also set off a massive earthquake along the San Andreas fault, killing millions of people.

When the team is certain the bomb has reached the U.S., they are about to put a plan into effect to protect San Francisco when they are overruled by the White House. The Vice President of the United States, former governor of Hawaii and highly respected geology professor, says that the target is the Yellowstone Volcano. The caldera is 55 miles across – the distance between Washington and Annapolis! It is over 1700 square miles – one and a half times the size of Rhode Island! Detonating the device in the Yellowstone Volcano wouldn’t just kill millions, it would kill billions of people.

The scene switches to Yellowstone. Agent Cornell recruits a former volcanology student of the Vice President working at the Yellowstone Volcano Observatory (YVO). He is unaware she is the traitor’s girlfriend. She is unaware her boyfriend is the traitor. The terrorists arrive with the bomb. Everyone, including the 388th Fighter Wing, prepared for an air strike, converges on the YVO borehole drilled into the volcano’s caldera…..

FINAL EXTINCTION is available from Amazon, Barnes & Noble and iTunes.

Fast paced – can’t put it down novel. Can’t wait for the next one from Michael Curley!!

Michael Curley is a lawyer who has spent the majority of his career in project finance and the last 25 years in energy and environmental finance. He joined the Environmental Law Institute as a Visiting Scholar in 2013. He is the author of Finance Policy for Renewable Energy and a Sustainable Environment, published by Taylor & Francis in 2014. He also wrote The Handbook of Project Finance for Water and Wastewater Systems (Handbook), published by Times/Mirror. He is currently writing the second edition of the Handbook, which is scheduled for publication in 2016. He contributes to the Huffington Post, and is a member of the American Society of Journalists and Authors and the National Press Club, where his sits on the Book & Author Committee. He has published over 40 articles – 6 in 2014, and 5 so far in 2015.

In the early 1980’s, he raised the venture capital for, founded, and served as president and CEO of the third municipal bond insurance company in the world and the first to insure economic development projects. He sold the company to a major international bank. He was also a partner in the New York City law firm of Shea & Gould.

Mr. Curley has also served in several roles in government. First, as Deputy Commissioner & General Counsel of the New York State Department of Economic Development; and then as President and CEO of the State’s bank for economic development. He was also the General Counsel of the New York State Science & Technology Foundation, the State’s venture capital agency. Prior to that, Mr. Curley served as Parliamentarian of the New York State Assembly and Associate Counsel to the Speaker and was also an Assistant to Congressman Richard D. McCarthy (D-NY) in Washington, DC. He also served as Adjunct Professor of Banking & Finance at New York University teaching Venture Capital and Capital Markets and was appointed to the Board of Directors of the United Nations Development Corporation by New York City Mayor Ed Koch.

For the U.S. Environmental Protection Agency, Mr. Curley served as Senior Financial Advisor to the Office of International Affairs where he developed national municipal bond banks for water, wastewater, district heating and other municipal infrastructure for both the Russian Federation and Ukraine, designed a revolving fund for safe drinking water for the Ministry of the Environment in the Republic of Georgia and built fifteen rural water systems and developed the national model for rural water finance in the Republic of Kazakhstan.

As a member of the Board of the International Rural Water Association, Mr. Curley built water and basic sanitation systems in Honduras, El Salvador, and Guatemala. He continues this work privately today in Guatemala. In the Fall, he and a colleague at the Bloomberg School of Public Health will start writing a book about bringing safe water and basic sanitation to the rural poor in developing countries. The book will be published by the Johns Hopkins University Press.