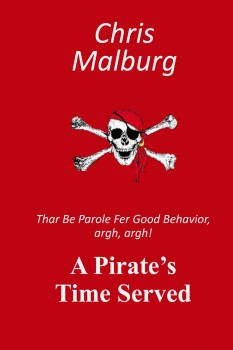 Thar be redemption for a pirate’s past sins…and plenty O’ me treasure to spread around. All ye have to do is find it. Argh, argh!

The ghost of pirate Black Bart joins forces with two over-privileged teens and their relatives on St. Croix in a modern-day quest to discover priceless buried treasure and along the way, their life’s mission under the most unlikely and dangerous circumstances.

Careful what you wish for…

Sarah Schilling’s twelve year-old brother is wicked smart. But this? Pure genius. Brian snagged an invitation to spend the summer with their favorite aunt and uncle on St. Croix. Uncle Jack tells them, “There will probably be some swimming, some diving. We like to run. There’s a range, so maybe you’ll learn to shoot. Cooking. Your Aunt Helen is a classically trained chef. You knew that, right? There’s the Mallard seaplane, so maybe you’ll learn something about flying. That sort of thing.”

That sort of thing sounds like too much work for Sarah Schilling’s summer on the beach. Until Brian’s scuba regulator mysteriously fails sixty feet underwater. Her training snaps into laser focus. During Brian’s rescue they unearth the 250 year-old secret of Black Bart—the pirate and his ghost. The discovery launches them into a hurricane of peril at the hands of modern-day pirates. The Schilling family will not survive unless Brian and Sarah discover the most powerful weapon that is within themselves.

A Pirate’s Time Served is a Young Adult / Middle Grade thriller of a ghost story. It shows how two teens can dig deeper than they thought possible, discovering what it means to lead, to follow, and to never ever give up—especially on family.

A PIRATE’S TIME SERVED is available from Amazon.

The fun side is that he has transitioned into a serious novelist. A CPA/MBA and former investment banker, Chris certainly has the business chops to weaponize an industrial WMD. He has crossed the chasm from biz-speak into fiction with his third installment in his Enforcement Division series, A Pirate’s Time Served. This is a young adult novel that’s a rollicking good ghost story. Watch A Pirate’s Time Served trailer.