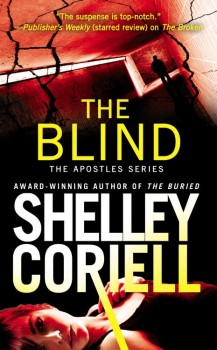 Shelley Coriell’s THE BLIND is another dark and twisty romantic thriller in the Apostles Series. The Big Thrill caught up with Coriell to discuss her critically acclaimed series, as well as what’s lurking in her future.

Tell us about THE BLIND, the third book in your Apostles Series, which features an elite team of FBI agents who work outside the box and at times, above the law.

THE BLIND is the story of Special Agent Evie Jimenez, a fiery female FBI bombs and weapons specialist who teams up with Jack Elliott, a buttoned-up billionaire philanthropist and art collector, to track down a serial bomber who uses bombs and live models to create masterful art that lives and breathes—and with the flip of a switch, dies.

Set in the eclectic streets of the downtown Los Angeles Arts District, THE BLIND is a story of art and beauty and ultimately, power. As work-a-holic Evie hunts down an increasingly deadly serial bomber, she finds herself fighting intense feelings for Jack, a powerful businessman with control issues, and struggling with her femininity, and ideas about family. Explosions are going off everywhere in Evie’s world.

Evie Jimenez, the heroine in THE BLIND, is an FBI bombs and weapons specialist. What inspired you to write such a strong female character?

While drafting THE BLIND, I joked around that this book should come with a warning label, something like: Warning: Strong Woman Ahead! I blame my daughters.

When I started writing THE BLIND, two events rocked my world. One of my daughters was leaving for college for the first time, and another was taking off on a five-month trip around the world, a world that can be brutally unkind and full of dark-hearted souls. I comforted my aching mommy-heart with the knowledge that my daughters are smart, strong, confident, and armed with tools to combat the evils of this world.

And THAT is Special Agent Evie Jimenez. In hindsight, I genuinely think I poured everything into Evie that I wanted in my girls as they spread their wings. Evie is the essence of GIRL POWER.

Like the first two books in the Apostles series, THE BLIND has a few unexpected twists, one of them being the prevalence of art. Why so much art in a story about a serial bomber?

Bombers destroy. Artists create. I loved the juxtaposition. Art gives a nice balance to the serial killer’s dark mechanizations, and technicality in a book about bombs. I included everything from classical and street art, to skin art and children’s finger painting.

Downtown Los Angeles really comes alive in THE BLIND. What kind of research did you do?

I literally walked the streets of downtown Los Angeles for weeks. For those of you unfamiliar with the area, downtown L.A. consists of many distinct and fascinating districts, including the Arts District, Historic Downtown, Fashion District, Little Tokyo, and the Financial District, all of which appear in THE BLIND.

On two separate research trips to L.A., I visited dozens of art galleries and met some amazing artists on evening art walks. While strolling through the historic warehouse section, I saw a film being shot. And in one of my more poignant research moments, I was driving along Skid Row the day before Thanksgiving with my husband and three daughters. As we passed a row of shelters made of tarps and cardboard boxes, one of daughters quietly observed, “We have much to be thankful for.”

The sights, sounds, and people of downtown L.A. really seeped into my soul, and I think that comes through in THE BLIND.

The first two books in your Apostles Series received some nice critical acclaim, including being named one of Publishers Weekly’s Best Books of 2014 (The Broken) and a nomination for ITW’s 2015 Thriller Award for Best Paperback Original (The Buried). What’s next for the Apostles?

I’m so excited that Detective Lottie King, a beloved minor character in the Apostle world, is finally getting a story of her own. In January, the first volume in the Detective Lottie King Short Story Series will release. Readers first met Lottie in The Broken, where she helped the Apostles track down the Broadcaster Butcher. Lottie is my hard-driving Colorado Springs homicide detective with a soft spot for peach pie, high heels, and her seven grandchildren. Talk about another strong woman! 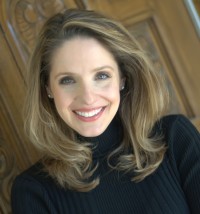 Shelley Coriell is an award-winning author of romantic suspense and novels for teens. Her debut romantic thriller, The Broken, was named one of the Best Books of Summer 2014 by Publishers Weekly and the follow up, The Buried, was nominated for a 2015 ITW Thriller award for Best Original Paperback. An avid foodie and former restaurant reviewer, Shelley lives in Arizona with her family and the world’s neediest rescue weimaraner.