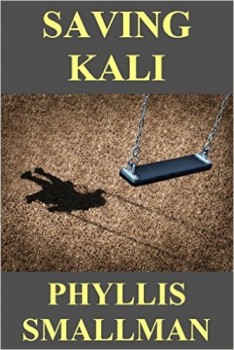 A short fiction about a homeless woman, a sexual predator, and a child in danger.

Why would a woman take a child into an abandoned warehouse late at night and leave her there? Alex doesn’t want to know. Living in the alley in her old van, she has hit rock bottom and is fighting to keep herself alive and safe. But it seems she hasn’t quite given up all that makes her human. Now she must decide how far she is willing she go to save the child. Would she take a life? And is her own life more important than that of an unknown child?

SAVING KALI is available from Amazon.

Phyllis Smallman’s first novel, MARGARITA NIGHTS, won the inaugural Unhanged Arthur award from the Crime Writers of Canada after being shortlisted for the Debut Dagger in the U.K. and the Malice Domestic in the U.S.. Her writing has appeared in both Spinetingler Magazine and Omni Mystery Magazine. The Florida Writer’s Association awarded CHAMPAGNE FOR BUZZARDS a silver medal for the best mystery and her fifth book, HIGHBALL EXIT, won an IPPY award in 2013. LONG GONE MAN won the Independent Publisher’s IPPY Gold Award as best Emystery/thriller in 2014. The Sherri Travis mystery series was one of six chosen by Good Morning America for a summer read.

Before turning to a life of crime, Smallman was a potter. She divides her time between a beach in Florida and an island in the Salish Sea.