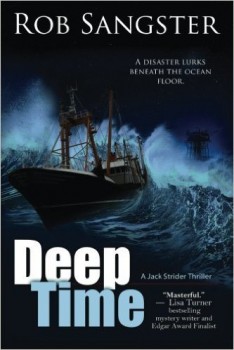 The second Jack Strider thriller. After his god-daughter dies in a bizarre ship incident, Strider begins a high-level, dangerous investigation of an oil tycoon’s deepwater drilling platform in the Pacific. What he learns is terrifying–the mogul is trying to tap massive stores of methane and other gas. But one mistake could cause an eruption–and a tsunami–that could wipe out America’s west coast.

DEEP TIME is available from Amazon.

Rob Sangster is an award-winning author, Stanford lawyer, newspaper columnist, sailor, rock climber, and has traveled in 110 countries so far. He and his mystery writer wife divide their time between homes in Memphis and on the wild coast of Nova Scotia.