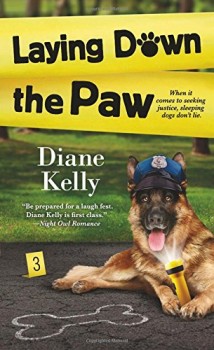 Readers often want to know where writers find their inspiration. Some writers find inspiration in the headlines. Others find it in the people around them or in experiences they’ve had. In the case of my Paw Enforcement K-9 cop series, inspiration simply licked my ankle. One look down at my black and tan Shepherd mix and I realized a dog like him would make a great character for a mystery series.

Yep, I’m a big animal lover. My husband and I share our home with three dogs and six cats. Being outnumbered more than four-to-one by furry, four-footed creatures qualifies me as a “crazy cat lady” and violates a number of city ordinances. Still, even though I can’t get out of my house without fur on my clothes, I wouldn’t have it any other way. Along with the plastic poop bags and hacked-up hairballs, my dogs and cats bring love and laughter to our lives.

One of the wonderful things about dogs is their emotional honesty. Dogs don’t hide their feelings. If they’re happy, their wagging tail lets you know it. If they’re feeling threatened, the ears go back and the teeth come out. If they don’t want to move from their favorite spot on the couch, they give you a look of unmistakable disdain that says, “I was here first. Buzz off, mere human.”

While my Death and Taxes mystery series includes pets in secondary roles, my Paw Enforcement series puts a Shepherd-mix dog front and center as a critical part of female K-9 cop team. My furry, freeloading housemates provide plenty of fodder for my canine character, from chewing up shoes to chasing squirrels to stealing food off my plate when my back is turned. But given the inspiration they’ve given me, I’ll forgive their minor misdemeanors.

Teaming up Fort Worth Police Officer Megan Luz with her K-9 partner Brigit has proven to be a perfect pairing for my brand of comedic crime capers. Readers have enjoyed the interplay between the two females as each vies to be the alpha of their two-member pack. What’s more, a K-9 comes with a unique set of crime-fighting skills, including a powerful nose that can sniff out clues.

Whatever you have planned for today, I hope you’ll find a source of inspiration. It might even be waiting for you at a local animal shelter! 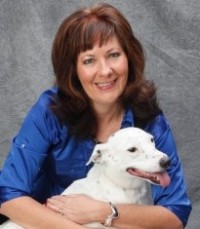 Diane Kelly is the author of funny, romantic mysteries, including the Paw Enforcement K-9 series and the Death and Taxes white-collar crime series. She is a former state assistant attorney general and tax advisor who spent much of her career fighting, or inadvertently working for, white-collar criminals. She is also a proud graduate of the Mansfield, Texas Citizens Police Academy. Diane has combined her fascination with law enforcement and her love of animals in her K-9 cop Paw Enforcement series.