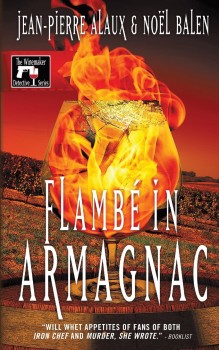 Imagine yourself in a corner of France, with its customs and history, its Armagnac and duck confit. Then add some mystery. That was my world as I translated FLAMBE IN ARMAGNAC, the French title of this latest installment in the Winemaker Detective series by Jean-Pierre Alaux and Noël Balen.

In the heart of Gascony, a fire ravages the warehouse of one of Armagnac’s top estates, killing the master distiller. Wine expert Benjamin Cooker is called in to estimate the value of the losses. But Cooker and his assistant Virgile want to know more. How did the old alembic explode? Was it really an accident? Why is the estate owner Baron de Castayrac penniless? How legal are his dealings?

The deeper the winemaking detective digs, the more suspicious he becomes. There is more than one disgruntled inhabitant in this small town. As readers are witness to the time-honored process of Armagnac distillation, the day-to-day activities of the hunt, the marketplace, and the struggles for power within the community, they get a glimpse of the traditions of southwestern France. Similarly, they are introduced to characters from all walks of life—landed gentry with noble titles, former aristocrats contriving to hold on to their status, and the working-class salt of the earth. Each has a story to tell, and Cooker has to listen carefully in order to piece together the mystery of the Chateau Blanzac inferno.

One of the colorful characters in the story is the “roving distiller,” a man who inherited the craft of turning wine into Armagnac by way of an intricate yet medieval-looking machine called an alembic that he hauls from estate to estate with his tractor. The transformation of simple alcohol into the highly prized eau-de-vie seems symbolic of complex human relationships the reader encounters in the village.

As he draws nearer to the truth about family connections, Virgile, with his unassuming candor, ruffles more than a few feathers. Blood is soon shed, and secrets are revealed. When the facts come bubbling to the surface, what began as a simple matter of accounting and indemnity becomes more a question of accountability and its painful reality. And Armagnac, the livelihood of the people in the story, serves as both truth serum and bitter tonic.

This series has spawned a popular television series in France. FLAMBE IN ARMAGNAC is the seventh title in the series but can be read as a standalone. 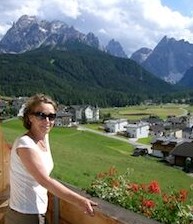 Translator Sally Pane studied French at State University of New York Oswego and the Sorbonne before receiving her master’s degree in French literature from the University of Colorado. She has translated several titles in the Winemaker Detective series, which is published by Le French Book.