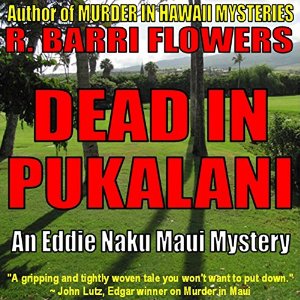 From the award winning crime writer R. Barri Flowers and bestselling author of the Murder in Hawaii Mysteries, comes the first book in a new Hawaii detective series, Dead in Pukalani (An Eddie Naku Maui Mystery).

Private investigator Eddie Naku is hired by attractive divorcee Kathryn Higuchi on Maui to investigate the murder of her sister, Suzette Higuchi Bordeau, wife of a well-known criminal defense attorney. She was gunned down in a shopping center in the Upcountry region of Pukalani.

What seems like a routine case for the ex-police detective turns into a complex murder mystery as Naku uncovers a web of lies, deceit, arms trafficking, infidelity, seduction, betrayal, and more murders as he tries to solve a deadly crime. In the process, he becomes a target and must identify the killer or killers before he winds up breathing his own last breath and leaving life in paradise behind.

Honolulu fashion designer Kiyoshi Yoshida had just gone through the worst year of her life after her twin brother Sergio Matsuko, one time dedicated and decorated homicide detective for the Honolulu Police Department, was identified as the Aloha Black Scarf Killer, a serial killer who had raped and murdered seven women. He committed suicide before he could be apprehended.

Kiyoshi relocates to Maui, hoping to escape the notoriety, but is pursed by a true crime writer, hoping to get info about Matsuko for a book. Also watching Kiyoshi is a stone cold killer, waiting for the right time to add here to her list of victims.

Dead in Pukalani will keep you entertained and in suspense from beginning to end as a Hawaii mystery and page turner in the spirit of Aloha!

DEAD IN PUKALANI is available from Amazon, Audible and iTunes.