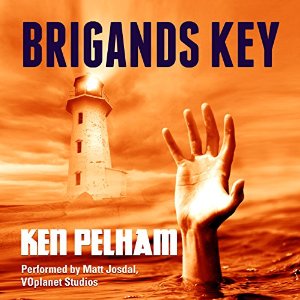 Death sweeps in off the Gulf of Mexico…

An ageless, impossible corpse at the bottom of the sea. A lethal plague. A ruthless murderer. A monster hurricane. Archaeologist Carson Grant came to Brigands Key to escape the limelight and repair his shattered reputation, and finds himself instead staring down the Four Horsemen of the Apocalypse.

BRIGANDS KEY is available from Audible.

“A perfect storm of menace…breathtaking! … BRIGANDS KEY remains highly entertaining. The underwater scenes are marvelous, and the portrait of the monstrous hurricane as it batters the key and surges over it is mightily gripping.” … The Florida Weekly

Author of two award-winning novels, Ken Pelham grew up in the off-the-radar South Florida farm town of Immokalee, sandwiched between coasts and snuggled against wild, wooly Big Cypress Swamp. Pelham has published numerous short stories and nonfiction articles, and created the PROMETHEUS SAGA, an experimental online anthology. He lives in Maitland, Florida, with his wife, Laura.