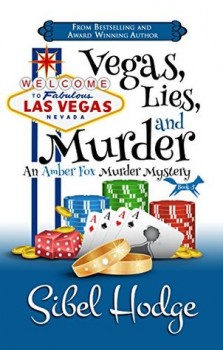 The Bestselling Cozy Mystery Series is back with more adventures!

“If you like Janet Evanovich’s Stephanie Plum I think you will really like Amber Fox – I know I do.” ~ Martha’s Bookshelf

When feisty insurance investigator Amber Fox lands in Las Vegas to tie the knot with her fiancé, Brad Beckett, she’s got three things on her mind: fun, relaxation, and lots of honeymoon action.

But after one wardrobe malfunction and a botched Elvis-themed ceremony, Amber’s personal life is in overload, and her lucky knickers definitely aren’t working their magic. And if that wasn’t enough to ruin her special day, Amber finds herself in the middle of investigating the disappearance of an exotic dancer and working undercover in a gentleman’s club, Polesque, bringing a whole new meaning to seeing the Vegas Strip.

In Sin City, the stakes are high, but whoever said “What happens in Vegas, stays in Vegas” hasn’t bet on meeting an angry Amber Fox.

VEGAS, LIES, AND MURDER is available from Amazon.

“If you like Janet Evanovich’s Stephanie Plum I think you will really like Amber Fox – I know I do.” ~ Martha’s Bookshelf

“Sibel Hodge writes in such a way that it feels like your best girlfriend is dishing the dirt and letting you in on her best secrets. Her Amber Fox Mystery series is the perfect combination of chick lit and mystery.” ~ A Girl and Her Kindle

“Sibel Hodge does it again! Another book I just couldn’t stop reading. I absolutely love Amber Fox series and I am so glad I got to read and review this one because it was fantastic.” ~ Geeky Girl Reviews

“Amber Fox is a modern, career-driven woman who seems to be a cross between Kinsey Milhone and Gracie Hart (Miss Congeniality). I enjoyed the great mixture of action adventure and slapstick. I found myself chuckling out loud and on one occasion snorting water out my nose.” ~ Coffee Time Romance & More

“Amber Fox was hilarious with her tough as nails outer persona and her hysterical one-liners that were frequently laugh out loud funny. I definately recommend picking this book up!!” ~ The Caffeinated Diva reads…

“Amber Fox is the kind of strong lead female character with a great sarcastic wit that I love to read.” ~ To Read, Perchance to Dream

Sibel Hodge is the author of No. 1 Bestseller Look Behind You. Her Amber Fox Mysteries and romantic comedies Fourteen Days Later and The Baby Trap are International Bestsellers on Amazon, Barnes & Noble, and iBooks. She writes an eclectic mix of genres, and she’s a passionate human and animal rights advocate.

Her work has been shortlisted for the Harry Bowling Prize 2008, Highly Commended by the Yeovil Literary Prize 2009, Runner Up in the Chapter One Promotions Novel Comp 2009, nominated Best Novel with Romantic Elements in 2010 by The Romance Reviews, Runner Up in the Best Indie Books of 2012 by Indie Book Bargains, Winner of Best Children’s Book by eFestival of Words 2013, Winner of Crime, Thrillers & Mystery | Book from a series in the SpaSpa Book Awards 2013, and Nominated for the 2015 BigAl’s Books and Pals Young Adult Readers’ Choice Award. Her novella Trafficked: The Diary of a Sex Slave has been listed as one of the Top 40 Books About Human Rights by Accredited Online Colleges.