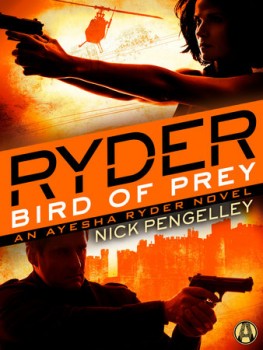 The Maltese Falcon was no mere tale. The fabulous jeweled golden bird really existed. Still exists, according to the last words of a dying man. Ayesha Ryder is on its trail, for reasons other than the Falcon itself. It is said to contain a clue to the lost burial place of King Harold of England – seen as a potent symbol by ruthless politicians determined to break up the UK and create a new, independent, English Kingdom. The Falcon may contain a second clue, one few would believe.

Labeled an assassin, hunted by Scotland Yard and Dame Imogen Worsley of MI5, as well as those who want the Falcon and its secrets for themselves, Ayesha joins forces with Joram Tate, a mysterious librarian known to her friend Lady Madrigal, one-time lover of Lawrence of Arabia. With Ayesha’s attraction to Tate growing, they follow clues left by long dead knights to the tomb of a Saxon king, then to ruined Battle Abbey. When the trail leads them to the discovery of a stunning secret hidden for a thousand years beneath an English castle, Ayesha must battle modern killers with medieval weapons before confronting the evil that would destroy her nation.

BIRD OF PREY is available from Amazon, Barnes & Noble and Penguin Random House.

“Superb, scintillating and stupendous – or to put it more plainly, simply brilliant.”
Splashes Into Books

“Ryder: Bird of Prey” is a top-notch adventure that will really get your blood flowing as you flip pages trying to find out what is going to happen next.”
Vic’s Media Room

“This series needs to be written into a screenplay for a future movie – I would seriously buy a ticket to see it!”
Bell, Book and Candle

“Thank you, Mr. Pengelley, for once again giving us a truly fantastic adventure with Ryder!”
Read Love Blog

Nick Pengelley lives in Mississauga, Canada with his wife and two sons. He has had a varied career as a law librarian and law professor (specializing in international commercial arbitration) in Australia, Canada and the U.K. He has also worked as an analyst for a major Canadian NGO that focuses on the culture and politics of the Middle East, a field about which he is passionate. He is currently a consultant on Australasian law.

Nick cites many influences on his writing. Readers of “Ryder” will not be surprised that authors like H. Rider Haggard, Sir Arthur Conan Doyle, John Buchan and Peter O’Donnell figure prominently. He is a fan of the ripping yarns of the inter-war years – by writers such as Sapper, Dornford Yates, Edgar Wallace and Leslie Charteris.

His more modern favourites include Umberto Eco (particularly “The Name of the Rose”), Alan Furst, Douglas Adams, Terry Pratchett, Neil Gaiman and Elizabeth Kostova (“The Historian”). Nicholas reads a “book or so” a week (and is horrified to think that, if he lives to be 200, he may only get to read 10,000). These days, although he still reads fiction, he is mainly interested in modern European and Middle Eastern history, and biography, having discovered some years ago that truth really is stranger than fiction. He lists his heroes, literary adventurers all, as Winston Churchill, T.E. Lawrence, Gertrude Bell and Teddy Roosevelt.