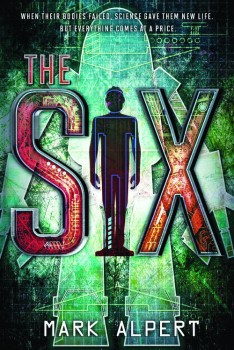 Adam Armstrong is a brilliant, wheelchair-bound seventeen-year-old dying of muscular dystrophy. While playing one of his virtual-reality games he encounters Sigma, an artificial intelligence program created by Adam’s computer-genius father. Sigma has gone rogue, threatening to kill Adam and then the rest of humanity, and the only way to stop it is to use the technology Adam’s dad developed to digitally preserve the mind of his dying son.

Along with a select group of other terminally ill teens, Adam becomes one of the Six who have forfeited their failing bodies to inhabit weaponized U.S. Army robots. But with time running short, the Six must learn to manipulate their new mechanical forms and work together to train for epic combat…before Sigma exterminates the human race.

“I loved The Six by Mark Alpert. This is serious YA sci-fi, full of big ideas, big questions, real science, and things that will make you think and wonder and lie awake late at night. And it’s all wrapped up in a wonderfully exciting action story chock full of characters you’ll love. You’ll want to believe the Sigma threat is far off in the future, but it’s probably not as far off as you think. These revolutionary capabilities are likely within the lifespan of readers, so this is not far-off spaceship sci-fi, this is OMG-this-is-actually-happening sci-fi. And props to Mark Alpert for including a population of kids that has very little visibility — the handicapped, the terminal, the ultimate outsiders. A very nice piece of work.” ~Michael Grant, New York Times bestselling author of Gone

“The Six are introduced as terminally-ill teens, but there’s plenty of high-speed action in which they engage. Their physical disabilities and limitations through disease are forgotten as the teens’ hearts, minds, and personalities shine through, even though their bodies are now steel data containers…questions of principle, power, and possibility keep this look at our modern, hardwired existence fresh and fascinating. STARRED.” ~Booklist 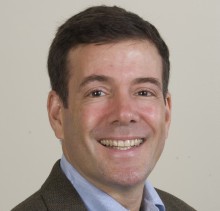 Mark Alpert is a contributing editor at Scientific American and the author of several science-oriented adult thrillers: Final Theory (Touchstone/Simon & Schuster, 2008), The Omega Theory (Touchstone, 2011), Extinction (Thomas Dunne Books/St. Martin’s Press, 2013) and The Furies (Thomas Dunne, 2014). The Six is his first Young Adult novel. He lives with his family in New York City.