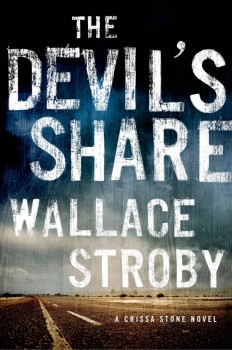 Born and raised in New Jersey, Wallace Stroby had a long career as a journalist before turning to novel writing.  He worked for the Asbury Park Press as a police reporter, and was a Sunday features editor for the Newark (N.J.) Star-Ledger.  His years writing and editing for newspapers helped him develop the razor-sharp prose, compelling sense of character, and precise attention to detail that mark his books.

THE DEVIL’S SHARE, Stroby’s new novel, is his seventh overall and the fourth about professional thief Crissa Stone, who debuted in 2011’s Cold Shot to the Heart. The Big Thrill talked with Stroby about his early books and his latest effort.

Your first two books, The Barbed-Wire Kiss (2003) and The Heartbreak Lounge (2005), were set along the Jersey Shore and featured a male former state trooper named Harry Rane. Then your third book, Gone ‘til November (2010), focused on a Florida sheriff’s deputy, Sara Cross, doing her job and facing dangers in an overwhelmingly male world. What was the impetus behind you creating Harry Rane, and why did you decide after the Rane books to switch perspectives, first to a female law enforcement figure, then to a woman who’s a professional criminal?

With Harry, I essentially wanted to write about the area I grew up in, and where I continue to live, the Jersey Shore, specifically Monmouth County. It was changing a lot at that time, a lot of development going on, and I wanted to capture that a little. Harry’s house is based on my grandmother’s farmhouse in Englishtown, N.J., where I spent a lot of time as a kid (the farm was sold a few years back, the house razed).

In Heartbreak Lounge though, I ended up telling a lot of the story from the point of view of the villain, an ex-con named Johnny Harrow, and I found myself intrigued with that. He was a bad guy who did some evil things, but he had his reasons.

I took that a step further in Gone ‘til November, with nearly half the book written from the perspective of an aging black hitman. Again, his backstory—growing up in poverty in Newark, N.J., going through the riots, et cetera—fascinated me. So I wanted to do an entire novel from the point of view of a career criminal, steering as clear of cliché as I could. Making Crissa a woman in a predominantly male world—as Sara had been in law enforcement—opened up all kinds of possibilities.

The most famous modern professional criminal in fiction has got to be Richard Stark’s Parker. And I can’t tell you the number of times I’ve heard Crissa Stone referred to as a female Parker. That description of her itself harbors a potential criticism, that you’ve written a character who in her toughness and behavior is essentially a man with a women’s name. Is there anything you do in writing Crissa, pro that she is, to make her specifically not feminine exactly but different, let’s say, than a man?

In my mind, it all comes down to relationships. That’s what interested me about the character in the first place. Rather than a traditional lone-wolf male hero, I wanted Crissa to be someone who had connections to things, even if her lifestyle made them difficult to retain. So she has a lover in prison and a young daughter being raised by a cousin, and she usually works with partners she trusts and respects. In one sense, she’s trying to build a normal life for herself and make all the pieces fit, doing it the same way she would orchestrate a robbery—“plan the work and work the plan,” as she says. By the end of Kings of Midnight, she kind of realizes she’s fooling herself. Because of the events of that book, she’s a little harder and colder in the third one, Shoot the Woman First. But then her relationship with a troubled little girl melts a lot of that away—though she’s still capable of moving lethally into Mother Lion mode to protect her.

Also, my first reader on Gone ‘til November and all the Crissa books was a woman, as are my editor and agent. So occasionally they’ll point out things that don’t ring true for the character, for which I’m grateful.

Kings of Midnight, your fifth novel and the second Crissa, used the idea of the legendary missing 1978 Lufthansa heist money as the springboard for the plot.  THE DEVIL’S SHARE involves plundered Iraqi antiquities.  I’m wondering whether this too is based, however loosely, on something you researched.

I did a lot of research regarding specifics. I knew what I wanted the basic plot to be, but I also wanted to be able to name real archaeological sites and artifacts and describe them accurately. At the same time, I was interested in the idea of private military contractors operating as corporate armies for hire, so I researched that a little too.

As it is, one of the defenses that Emile Cota, the crooked art collector in DEVlL’S SHARE, offers for smuggling priceless items into the U.S. is that they’re safer with someone that values them—even if they’re stolen—than being at the mercy of whatever regime change is going on in their native country. Ironically, ISIS’s recent destruction of ancient archaeological sites in Iraq and Syria bears him out. The book was written long before any of those stories came to light though.

I know from talks we’ve had about fiction and movies that your love of genre isn’t confined to crime. Both in books and in films, you enjoy a number of genres—horror, science fiction, westerns, and so on.  Have you ever seriously considered writing a novel in a genre besides crime? Any books you want to write, or plan to one day write, in a different genre?

I’d love to, but I don’t know if I could pull it off. I have an idea for a WWII aviation novel that’s haunted me for years, but the amount of research that would be involved—and the myriad chances to screw it up—have scared me off. Likewise, a story about Depression-era bank robbers. But for every road you choose, there’s one you don’t—and time is finite. So I tend to work on the projects that come to hand. You know when something’s ready to be written. And when it’s not, it’s hard to force it. 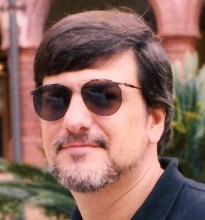 Wallace Stroby is an award-winning journalist and the author of seven novels, including THE DEVIL’S SHARE, the fourth in his series about professional thief Crissa Stone. His other titles include SHOOT THE WOMAN FIRST, KINGS OF MIDNIGHT, COLD SHOT TO THE HEART, THE HEARTBREAK LOUNGE and THE BARBED-WIRE KISS. For 13 years he was an editor at the Newark (N.J.) Star-Ledger, Tony Soprano’s hometown newspaper.

Scott Adlerberg is the author of the novel Spiders and Flies and the novella Jungle Horses.