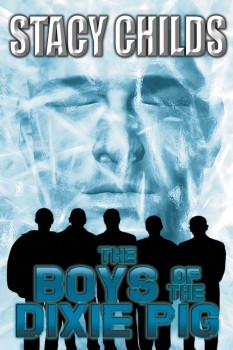 As a weapons dealer, Mack Barton has spent the last four decades running from someone scary, and now is no exception. A crime boss in Las Vegas wants to kill him because of an overdue gambling debt (one of his bad habits—another is tequila). And is it the C.I.A. blaming him if some munitions fell into the wrong hands in a Syria deal? Or the last Colombia deal?

Thinking that it might help him get his mind off of those chasing him and trying to eliminate him, Mack accepted an invitation to a reunion with his four good friends from high school. He traveled to Golden, Colorado, where he and three others were wined and dined by their mutual buddy, Ace Strain, a psychiatrist and proprietor of a cryonics company. But, only one of the five was aware of the sinister plot being planned against the others.

“I enjoyed Stacy Childs’ debut novel, Block 10, and immediately became a fan. The Boys of the Dixie Pig is better. It displays Childs’ versatility within the medical thriller genre with a rapid-fire story that seems too fantastic to be true, but which sucks you in from page one and doesn’t let you go until the final word. I couldn’t put it down. Mack Barton is sure to become the Jack Reacher of medical thrillers.” ~Robert Dugoni, New York Times and #1 Amazon Bestselling Author, and author of My Sister’s Grave

“Childs has created a masterful work of medical suspense that I couldn’t put down. The Boys of the Dixie Pig is a hands-down winner!” ~Steve Babitsky, Chief Judge of SEAK, Inc.’s National Fiction Writing Competition for Physicians

Dr. Childs grew up in Abilene, Texas, went to college at Tulane University and medical school at L.S.U., both in New Orleans. He did his internship and residencies in Birmingham, Alabama, and practiced urology there for seventeen years. He and his wife moved to Cheyenne, Wyoming in 1995, where he practiced urology for nine years. His love of the mountains and skiing brought him to Steamboat Springs in May of 2004.

Dr. Childs was active in clinical research for twenty-eight years and started three research companies, one of which went public. His early interests in infection and inflammation of the urinary tract led him to the faculty of The University of Colorado in Denver where he was appointed Clinical Professor of Surgery in the division of Urology in 1999—a position which he currently holds.

He is a consulting editor to the journal Urology, and is former editor-in-chief of Issues in Urology and the urology section of Medscape, among others. He has authored three medical texts, six chapters in medical books, and published over seventy-five articles in peer-reviewed medical journals. Dr. Childs began writing fiction in 2006. He has two published medical thrillers, Block 10 and The Boys of the Dixie Pig, both published by Crossroad Press.

In addition to practicing urology for nearly four decades, Dr. Childs enjoys ski racing, road biking, hiking, fly fishing, and rifle and hand gun target shooting. He was a torch carrier for the Salt Lake City Olympics, after which he ran two marathons in four weeks, the last one in New York. He is a prostate cancer survivor.