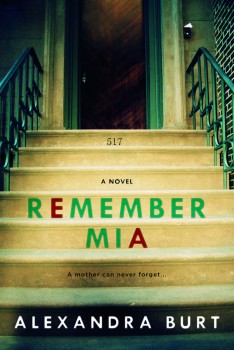 REMEMBER MIA is a thriller that puts you in the midst of every mother’s worst nightmare: her baby has disappeared. When Estelle Paradise’s baby daughter is taken from her crib, she doesn’t report her missing. A week later, Estelle is found in a wrecked car miles from home, with a gunshot wound to the head and no memory. The only thing she can recall is the blood…so much blood. She knows she holds the key to what happened that night—but what she doesn’t know is whether she was responsible.

Tell us about your background. You are originally from Europe?

I was born in Germany. I read English literature in high school—I remember Bram Stoker’s Dracula, C. S. Forester’s African Queen, and Mary Shelley’s Frankenstein—but other than that I read books exclusively in my native language. Days after graduating from college I boarded a plane to the U.S. I ended up in Texas, I married, and explored a career in corporate America. I eventually started reading English novels, gluttonously, day in, day out. After the birth of my daughter I became a freelance translator and even though the projects I worked on were mostly commercial, I really wanted to break into literary translations. The union never panned out and I so decided to tell my own stories instead. I took a few writing classes and eventually published my short fiction.

Tell us how you came up with the idea for REMEMBER MIA?

I eventually took a novel-writing class, and on the first day of class I was asked to post twenty-five pages. Needless to say, I hadn’t put a single word on paper. So later that night, I sat down and a sentence popped into thy head: “Tell me about Mia.” I imagined a woman, ravaged by postpartum depression, being confronted by a psychiatrist working to unravel the ball of yarn that is the disappearance of her infant daughter. The title may changed over the years, but the story remained the same; a tale of motherhood, shortcomings, and isolation. There were many revisions, many workshops, but eventually the story took shape.

Tell us about the part of the novel that is the harsh reality for some mothers—postpartum depression?

I had a rocky start with motherhood. I experienced nine months of nausea and a potentially life-threatening complications after childbirth that almost took my life. I just didn’t bounce back. I went about my days feeling like a zombie. To the outside world I looked fine but I had unsettling thoughts; visions of falling down steps while holding my daughter plagued me. And I told no one. Whenever she wasn’t with me, I would suddenly start and panic, convinced I had left her in some department store or market to fend for herself. My need to keep her safe at all times was in stark contrast to what I didn’t feel; the overwhelming joy of being a mother. I came around eventually, a year later. Coming around is the norm and sounds obvious and inevitable, but in my case it was the longest year of my life.

How did the concept of memory recall influence the story of REMEMBER MIA?

We all are, in a way, the sum of our memories. I was fascinated by our memory’s limitless capacity, and research suggests that memories never decay, they just become harder to access. Even to this day a childhood memory of mine will pop up out of nowhere, and when that happens I wonder where it’s been hiding all along. As I wrote the first draft of REMEMBER MIA, I decided to take the story to the highest level of suspense, the ultimate eraser of all memory—amnesia. In REMEMBER MIA, a mother holds the key to what happened to her baby that night, but she doesn’t know whether she was responsible, doesn’t know if she’s the victim or the perpetrator. With the help of a psychiatrist she attempts to solve the puzzle that is her missing daughter.

Are you working on any other projects?

I’m actually working on two projects right now. One is a YA crime novel that I’m co-writing with a YA author. We are in the very beginning stage and I enjoy the co-writing aspect immensely. I am very excited about the project and can’t wait to see what becomes of it. I am also working on my next novel. It takes place in a fictitious rural town in central Texas over a span of thirty years. It’s a story about a missing woman—there’s not a single photograph of her, just a hasty composite tucked away in a dusty file— and uncovering the woman’s life and death exposes abandonment and heartbreak, danger and salvation. And it will change the entire town.

What do you want beginning writers to know about the journey of becoming an author?

That’s a big one. First of all, I have come to the conclusion that the people who make it as writers are the ones who take criticism well; having thick skin is kind of a prerequisite. What you write is not your very soul on paper; it’s what you do with the craft. So it’s not personal; still, you should consider it your art and be protective of it, but take advice. And take classes, join a writers’ group—no one ever learned to write by themselves, hidden away at a desk in an attic. Other than that, put yourself on a diet of reading and writing, every single day of your life, and you’ll do well.

Thank you, Alexandra, for speaking with The Big Thrill. You can find out more about Alexandra Burt’s book on her website and connect with her on Facebook. 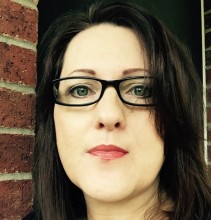 From the author: “I moved to Texas twenty years ago and, while pursuing literary translations, I decided to tell my own stories. After three years of writing classes and gluttonous reading, my short fiction appeared in the Freedom Fiction Journal, All Things Girl, and MUSED Literary Review. I am a proud member of Sisters In Crime, a nationwide network of women crime writers. I am currently working on my second novel. I live in Texas with my husband, my daughter, and my two Labradors.”