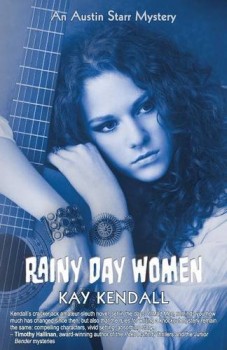 Reformed public relations executive Kay Kendall was an ITW debut author at ThrillerFest in 2013 with Desolation Row, the first in her Austin Starr Mystery series. Set in 1968, it explores murder and mayhem in the draft resister community. Now RAINY DAY WOMEN introduces amateur sleuth Austin Starr to women’s liberation when she helps a friend suspected of murdering a leading feminist. The author answers a few questions for The Big Thrill about rediscovering the chaotic sixties and what comes next in her writing career.

Tell us about how you came to write about the era that Mad Men has made trendy again.

Three years before the advent of Mad Men, I sent query letters to agents suggesting that aging boomers would be eager to read my novel set during the days of their youth. I even wanted to call my first manuscript—a wannabe literary novel—by the title of Boom. But I was too far ahead of the curve. In 2007 when Mad Men began, television viewers were shocked to see the sixties recreated. But then the show became a darling of critics and fans alike and rejuvenated interest in the time period. Tom Brokaw even swiped my intended title and published his book called Boom. All the while, I felt “called” to write about the sixties, believed in my vision, and figured it was an historic niche that needed filling. So I persevered.

Have you gotten any blowback for writing about such contentious subjects—Vietnam War protestors and now women’s liberation activists? How have these subjects been received by your readers?

I was prepared to get nasty remarks hurled at me, especially online when comments can be made anonymously. So far that has not happened. The closest I’ve come to negative remarks is when a few readers said that living through the sixties was difficult enough and so they preferred to keep their memories buried. On the other hand, at my best bookstore event, forty readers delved spontaneously into the effects of the Vietnam War on themselves and their loved ones. After an hour, the discussion showed no signs of flagging but had to stop so I could sign books. Deep wounds had surfaced, and this audience wanted to talk about them.

Conversely, I expect to find little or no resistance to reading about the women’s movement. When I began writing RAINY DAY WOMEN, I had no idea that women’s issues would become as timely as they are right now.

What draws you to historical subject matter?

I come at this question from two angles. As a reader, I love immersing myself in a long ago world and enjoy figuring out how aspects of the past have led us humans to where we are now. As a writer, I prefer to describe human emotions and motives rather than technical gadgetry that can prove who committed a crime. That inclination pushes me back to writing about the days before CSI could have existed.

I try to create an accurate portrayal of the time, to keep historical details in the background, and make the stories themselves entertaining. Not everyone is as much of a history freak as I am, to put it mildly. In fact, some people don’t even consider the sixties as historical. But I beg to differ. My characters are forever running around trying to find payphones when they are in the midst of emergencies. Man, is that time long ago and far away—history, in short.

Your previous career was in public relations. Why did you make the switch to writing fiction?

The great Gloria Steinem said it best: “Writing is the only thing I do that, when I’m doing it, I don’t feel like I should be doing something else.”

Can you give us a hint where your intrepid amateur sleuth Austin Starr will venture next in order to solve a crime?

Oh yes, definitely. In her third mystery outing, Austin gets ensnared in an East-West spy plot when she accompanies her husband David to an academic conference in Vienna. As I’ve often stated, I’m a student of the Cold War years—a fan, sort of—and Vienna was the epicenter for spying during much of that time. I’m having so much fun, writing my own spy story after loving the genre forever. John le Carré is like a god to me. My interest in the Cold War grew while I studied Russian in the Soviet Union one summer during the Brezhnev regime. I got hooked on all that tension and brinksmanship.

The first two books in your Austin Starr Mystery series are set in Canada. What is the story behind that?

Being married to a Canadian, I lived in Canada for many years before we relocated to Texas. Many Americans had told me that I would not experience any culture shock. This turned out to be false. The cultural and historical differences between the United States and Canada may be small, but they exist nevertheless, as does some anti-American feeling. My idea in writing the Austin Starr Mystery series was not only to treat the sixties like long-gone history but also to treat Canada like a real foreign country, from an American perspective. For a writer, exploring different terms for the same item and various pronunciations of the same English word is fun. Such differences make my amateur sleuth feel like an outsider in the Great White North. Also, she longs for home. One of the over-riding questions in the series is whether or not Austin Starr will succeed in returning to her home country.

And will she ever live in the United States again?

You will have to keep reading to find out!

Thank you, Kay, for speaking with The Big Thrill. 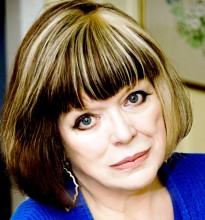 Kay Kendall, a contributing editor for The Big Thrill, writes historical mysteries set in the sixties. Growing up during the Cold War, she recalls the drama of an ICBM (intercontinental ballistic missile) installed near her hometown in Kansas and says this made her a fan of historical mysteries and spy novels. She sets her own stories during the Vietnam War, a key conflict of last century not already overrun with novels. A reformed PR executive who won international awards for her projects, Kay lives in Texas with her husband, three house rabbits, and spaniel Wills.

To learn more about Kay, please visit her website.