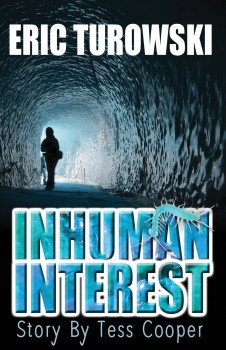 There is another side to the paranormal. A dorky side, a goofy side. A world filled with giant bugs and poodle icons, a place where graves are robbed not only of their corpses, and garbage trucks fly through the air. Eric Turowksi reveals this side in his first Story By Tess Cooper novel, INHUMAN INTEREST.

After writing several brutal novels of extreme horror, the humorous side of Turowski was dying to break free. You could tell, because an entire month of research went into determining the veracity of hyperoxygenating a Las Vegas casino for the sole purpose of growing spiders the size of Shetland ponies—and making it plausible.

Something had to give before things got too strange.

Indeed, something did give, but things got strange anyway. Turowski’s career in journalism spawned the dissatisfied, klutzy-but-spunky Tess Cooper, a reporter weary of corporate news. The character was borne from a mash-up of several dozen friends and acquaintances, all women in newspaper careers—cynical, hard-bitten, idealistic, and always on the verge of burning out, breaking down, and overeating.

But just because things get a little silly, there’s no need to shuck your action pants. INHUMAN INTEREST features antique gun battles with bullets carved of arcane materials, pathetic 1983 Subaru Brat car chases, enough foul, freezing weather to make the heartiest Snow Belter say, “Yep, that’s a lotta snow,” and a city in peril. Okay, so not even the residents of this Rust Belt metropolis give a rat’s ass about the city—it’s still in peril!

Wedged into the non-stop, thrilling action is a little romance with police Lt. Gunther (“That thing is turning us into animals in heat.”), warm family relations with Granddad (“What’s up your ass, Tess?”), and solid, professional photojournalistic insight with the tough-as-an-armadillo (and just as roly-poly) Angie Gold (“Since it looks like she’s got about a pound of mud and snow up her ass, I’d say the crime scene is violating her. Technically.”)

If you’ve managed to read this far though the bombast, you’ll want to check out INHUMAN INTEREST. 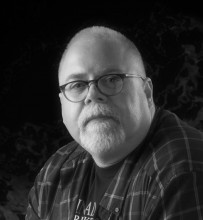 Eric Turowski is a thriller/horror author. He currently lives in California’s Central Valley with his fiancé, Mimi, and Tiger the Cat. For information on his writing, check out the blog on his website.