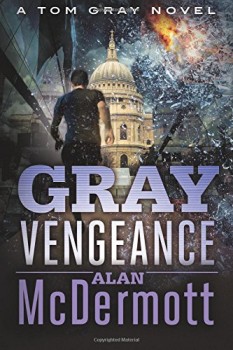 GRAY VENGEANCE is the fifth title in the Tom Gray action thriller series, recently released by Thomas & Mercer. Gray is an ex-soldier who runs a security company, and his journey started in England when he kidnapped five repeat offenders and paraded them on the Internet, letting the people of Britain decide their fate. That ended with Gray being whisked off to the Philippines with a new identity, but trouble wasn’t far away as local terrorists took him hostage. Close friends from the UK went to his rescue, but once again, nothing was what it seemed, and soon Gray and his crowd were in a fight for their lives.

Gray eventually returned to Britain, but the journey home was fraught with danger as a government-backed assassin tracked his movements. Only the intervention of MI5 operative Andrew Harvey saved Gray and his companions from certain death, and the two became close friends.

In Gray’s most recent exploits, a local gangster is hustling a relative for protection money while an African warlord threatens to wipe out his friends who are on a training exercise in Malundi. Gray has to decide who takes priority, with tragic consequences.

The latest installment sees Gray taking a back seat in his own company as clients seek to distance themselves from him, but he can’t stay out of the spotlight for long. A home-grown terrorist group launches a series of deadly attacks across Britain, prompting the government to bring a new surveillance tool online, and not a moment too soon. But is it ethical? And does that even matter now?

GRAY VENGEANCE was, as always, a thought-provoking and intelligent thriller. Where did the idea for Brigandicuum come from? For those who haven’t yet read that far Brigandicuum is the future that could rid us of terrorism but at the cost of our privacy.

It stemmed from an article I read about the data collected by GCHQ and NSA in America. Many people were outraged at the thought of our emails and text messages being harvested in the name of national security, and I began to wonder what it would take for people to accept that the monitoring of electronic communications is vital for our own protection. Rather than just present the current surveillance methods, though, I decided to create a system so invasive that few would be happy with its existence. The result was a tool that managed to track down over 200 terrorists within a few hours, but would the results ever justify the means?

The book details many attacks on British infrastructure. How did you research the authorities’ responses and countermeasures?

There really isn’t that much to research, as it isn’t the kind of thing the government wants out in the open. Whether or not they have plans in place to deal with an attack of this magnitude is hard to tell, so all I could really do was use my initiative. Police and armed forces levels are at a low, and I decided that by creating massive road blocks, it would hamper their ability to respond. I then thought about halting rail traffic and airlines, too, to make any kind of serious movement almost impossible. I realised that the mess would soon be cleared up, which is why I had a second round of attacks focusing on the clean-up operation. Add to that hits on the electricity and water lines, and you have a real mess on your hands. I’m sure some experts reading the book will find flaws in the plan, but for most readers I think it will be horrifyingly real.

Assuming you carried out your research via the Internet, have MI5 visited you yet?

That was always in the back of my mind as I entered my search phrases into Google! The fact that I already have a few books on the market might make it easier to explain to them why I was researching shaped charges and detonators, as well as the NATS air traffic control system. All I can do is hope no one ever tries to pull this off, otherwise I’ll be their number one suspect!

I know you hit a brick wall during the writing of this book. How did you break through?

That has happened with every book I’ve written, but especially so with this one. Mostly it has been a case of being stuck on one scene, but with this one I really didn’t know how it was going to pan out. All of my stories start out as a small seed and I am able to plan the first three chapters, and after that I write by the seat of my pants introducing new elements and seeing where they take me. With GRAY VENGEANCE, it was different. I got to the point where, after about 60,000 words, I felt I’d wasted half a year of my life. I couldn’t explain why I was so unhappy with it, so I sought the opinion of a couple of fellow authors. Their feedback was positive, but one point really made me focus: “I know who did it.”

Somewhere in the back of my mind, I’d been conscious of the fact that the twist had been revealed too early, and that was what had been holding me back. I returned to the story and changed a few chapters and soon found myself back on track.

I’m so glad I did, because what I once thought to be a waste of time turned out to be the most popular Tom Gray adventure yet.

As mentioned earlier the book poses the question, “If you could give up your privacy but also put an end to terrorism, would you?” Well . . . would you?

It’s a tough one. Do I want all of my communications to be monitored? I guess as someone with nothing to hide, it shouldn’t really bother me that my emails and text messages are being harvested. But then, is that the full extent of the current data gathering? Are my calls being monitored, too? Does a file exist on government computers detailing every communication I’ve ever made?

I don’t think we’ll ever truly know the full extent of government snooping, because once that information is out in the open, it is so easy to find workarounds, effectively rendering it useless.

On the flip side, I think the government has a duty to protect us, and if that means eavesdropping on calls and sifting through emails, I’m fine with that. Just as long as there are controls in place, such as how the data is used and how long it is stored for.

I believe the addition of Tom Gray’s daughter helped show his human side. How hard was it writing the sections that put his daughter in danger?

Quite difficult, especially as Gray’s child is called Melissa, which is also the name of my own daughter. I really put her through quite an ordeal in book 4, and it wasn’t any easier to stick her in harm’s way in GRAY VENGEANCE.   Luckily she has a very capable father to watch over her.

Throughout the book you throw many red herrings at the reader. How do you decide when and where to introduce these?

I think it is good to have a twist or two in a story. It is something I work on a lot, and I usually come up with them early in the story. As I said earlier, that didn’t happen with GRAY VENGEANCE, so toward the end of the book I had to go back and change quite a few things to get people looking in the opposite direction. 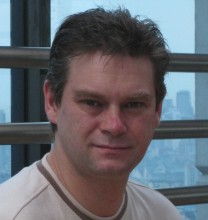 Alan McDermott is a husband, father to beautiful twin girls and currently lives in the south of England. Born in West Germany of Scottish parents, Alan spent his early years moving from town to town as his father was posted to different Army units around the United Kingdom. Alan had a number of jobs after leaving school, including working on a cruise ship in Hong Kong and Singapore, where he met his wife. Since 2008 he worked as a software developer creating clinical applications for the National Health Service. Alan gave up the day job in December 2014 to become a full time author. Alan’s writing career began in 2011 with the action thriller Gray Justice, his first full-length novel.