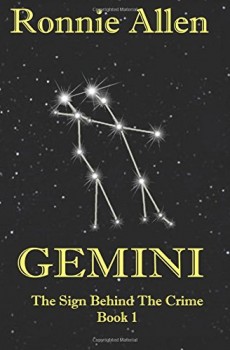 Brooklyn native Ronnie Allen worked for the New York City Department of Education for more than thirty years as a classroom teacher, staff developer, crisis intervention specialist, and mentor for teachers who were struggling. Along the way, she saw the horrors inflicted by child abuse on both the victims and society as a whole. She carries through this theme in her novel GEMINI, which also includes intriguing information about holistic healing and alternative therapies, such as Reiki and crystal healing.

Combining a love of the crime genre and her psychology background with her alternative therapies experience, writing psychological thrillers is the perfect venue for Ronnie.

In GEMINI, Barbara Montgomery, school psychologist by day and stripper by night, has an emotional meltdown and is given over to Dr. John Trenton for analysis in a seventy-two hour observation. But as the clock ticks down, her thirst for revenge only grows, until she breaks free and goes on a violent, killing rampage, targeting not only those who caused her to fall into an abusive foster care system, but everyone who stands between her and her revenge, including the NYPD, as well as Dr. Trenton … and his wife and the adoptive son they only recently rescued from the foster system.

Action, murder, sex, and healing all await you in GEMINI.

Here’s what Ronnie Allen had to say about her book in a recent interview.

What was the catalyzing event or idea that caused you to write GEMINI?

Well, I’m a NYC gal transplanted to rural central Florida. We’re here seven years. In 2011, I was bored. I missed the energy and fast pace of the city. I’ve been writing since the seventies. First in film and TV, not produced, but my screenplays were always in the crime genre. Then in the ’90s, I began my journey into holistic healing and I was published in a few professional journals. I was thinking about what I should do to occupy my mind. I was thinking about writing a novel and this was the time. I told my my friends at Mahjongg that I was going to write a novel and their reaction was like everyone else’s, “yeah right.” Well chapter by chapter everyone asked me, “What are you up to?” At the pool, this was daily. In all honesty, with people questioning and doubting, I was more motivated. I will always beat out anyone who says, “You can’t.”

Do you have a specific reader or target demographic in mind as you write?

Actually, I do. I like reading books, thrillers, with a higher readability level. Books I need to think about, books written in deep POV so I could feel the characters. My characters aren’t young, late thirties to early forties, so my readers would definitely be adult. And so is the content. In GEMINI, there are two contrasting locals, NYC and rural central Florida. So that would appeal to people across various regions. I write long, so my readers would be those who like substance to their books.

You have a background in school psychology and education, and as a practitioner of alternative therapies. How important was your life experience in fashioning your psychological thriller?

Very important. I had the career in education as the antagonist, minus the killing—not as school psychologist even though I hold the license, but in various intervention capacities plus teaching. In total, I spent thirty-three years with the NYC Department of Education. My protagonist, Dr. John Trenton is a “holistic psychiatrist.” Some practitioners call it “energy psychiatry.” There are real life Dr. Trenton’s. I added the “forensic,” because that’s his chosen specialty. Dr. Trenton practices the therapies I do and the ones I teach my clients. I do not do the Medical Orgone Therapy he does as that can be only used by psychiatrists. Chakra balancing, what I do, can be theoretically compared, but is much more gentle, and I don’t touch the body, as the medical doctor can, by law. The modalities I use, crystal healing, Reiki, Tarot can be seen in GEMINI and the reader can learn much about them. They could also learn how to contact and communicate with their spirit guide, if they choose to.

Are there drawbacks to writing about things related to your work and professional experiences? Do you worry about the reactions of former colleagues? Do you have fears about former clients targeting you?

I have to laugh at this question. I’ve told everyone that no one in the novel is anyone they know. All the characters are figments of my imagination. Just now, as I’m writing this, poolside, one of my friends came over so excited that she found her name in the book. I told her the character isn’t her. And it wasn’t. My former colleagues in Brooklyn, New York, when they read it, will probably say, “Oh my God! Barbara Montgomery is you!” And then they’ll rack their brains figuring out which principal we had who’s in the book. But it was none, and I had many administrators over the thirty-three years. Regarding clients. No, no one will target me because I didn’t work with this population. Dr. Trenton works with psychotics, psychopaths and sociopaths. I worked with spiritual people who wanted to foster their growth in a journey toward healing. I also looked at marketability. The psychic mediums are very strong today in novels across genres. So I feel that GEMINI will be a match for today’s readers.

Writing thrillers, especially psychological thrillers, can mean visiting some pretty dark places and writing about grisly, horrible things. Do you ever frighten yourself as a writer and, if so, is that a good thing?

Yes. I did visit dark places. And yes I did frighten myself. To be honest, that’s my job as a writer. If I don’t have an emotional reaction, neither will my reader. Even though I plotted, when I sat down to write, my characters took on a life of their own and pulled me into the direction they wanted to go. Usually, it was deeper into their insanities. When Barbara goes off in her thought language episodes, she took off and didn’t stop. Words poured out of my mind onto the paper as if I were channeling them. The love interest, Vicki, took off and made herself a larger role than I had intended. But her character works and I’m sure readers will love her. Same goes for sex scenes. If I don’t wiggle in my seat writing it, my readers won’t be affected reading it, either. For me, writing is a catharsis. I find it healthier delving into my characters’ insanities, than developing my own.

I also worked in a dark place. During my psych internship, I worked in mental hospitals. Most of my career in education was with children who had experienced more trauma and abuse than any child should know. There were incidences in which I had to have a child removed from their home. I also recovered weapons. In fact, the theme of GEMINI is that child abuse affects us all. I have such gratitude towards people in the educational system that try to help these children that I dedicated the book to them. The dedication of GEMINI reads, “To all the teachers out there who through blood, sweat and tears every day in their classrooms rescue and protect children from the horrors of abuse they endure in their lives.”

The cover for GEMINI indicates that it is Book 1 and includes the tag line “The Sign Behind the Crime.” Are the books to come tied thematically to other Zodiac signs? How soon can we expect to see more in the series?

Yes there are! Aries, Book 2, is coming out in the fall and I’m writing Scorpio, now. In Aries there are different protagonists, Dr. Frank Khaos, also a forensic psychiatrist and rookie Detective, Samantha Wright who’s the love interest. Dr. Khaos is a third degree black belt in BJJ and rehabs NYC gang members as he recruits them to leave the hood. Aries is also higher heat, much higher, than GEMINI. Aries symbolism is the clue to solving that case. Now, Scorpio will include the main characters from GEMINI and Aries, so it’s definitely a challenge to weave together the characters from both novels. In Aries, Dr. Trenton has a short consulting role to follow up on where he is at the time. I did that because I’m sure readers would want to know. Trenton and Khaos are opposites. Trenton is the Armani suit, long- haired, clean cut guy, sans tattoos, while Khaos is rough around the edges, T shirts and skinny jeans, bald, and tatted. Both men are big muscular guys, definitely alpha males.

This is a long list. And I’d love to meet these authors at ThrilerFest. Catherine Coulter, J.A. Jance, Nora Roberts, Faye Kellerman, Karin Slaughter, David Baldacci, John Verdon, Jeff Abbott. I love twists and turns which these authors have in their novels. What I like to try to do, is have a plot twist that no one expects, but then the ‘ah ha’ moment where the reader says to themselves that it makes sense.

Thank you for asking, Don. GEMINI is multi genre. In addition to being a psych thriller, it has what we call paranormal and romantic elements. I believe that combining elements gives a variety of more to grab onto. It’s not only a woman’s novel, but men who read it should be aware there are consummate and graphic sex scenes. Not that men don’t like to read sex, but I don’t like to toy with readers’ emotions and I want to be clear on what they should expect.

What advice would you give to other writers of romantic thrillers?

Write what you love. Never give up. If you love your manuscript do not give up after rejections. The more rejections you get bring you closer to the “yes.” If you’re fortunate to receive reasons in your rejection letters and get the same reaction multiple times, do something about it. Re-write and submit to others. My favorite writing quote is “writing is rewriting and rewriting.” Your first draft is not the one you should submit. Also get critique partners and beta readers. Listen to their advice if it resonates with you. Sometimes it may not, especially if the reader doesn’t write your genre. And this one hit me as I was reading my galleys. When your manuscript is completed, sit back and re-read it as a reader would. That was so enlightening. I found a few things that would make for a better reader experience and I changed them.

Ronnie Allen is a NYC woman transplanted to rural Central Florida seven years ago. A teacher for thirty-three years in NYC and NYS Licensed School Psychologist as well as a holistic health practitioner, Ms. Allen uses her background and the locals in which she has lived in creating Gemini, a psychological thriller.