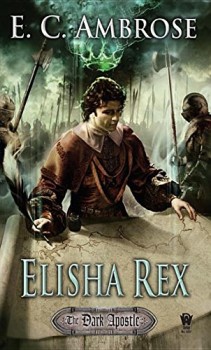 On the surface, my work doesn’t have much in common with contemporary medical novels. Today’s thrillers with medical themes often involve highly educated professionals—doctors, nurses, surgeons—while I’m invested in a peasant from the 14th century, whose medical education includes bleeding patients to balance their humors, the belief that water spreads disease, and the use of human anatomical charts based on pig dissections.

My adventure-based historical fantasy series, the Dark Apostle, which continues July 2 with ELISHA REX, began with reading far too many books about medieval medicine, until the facts and the anecdotes exploded into the idea for a story. My research began with a single title: Devils, Drugs, and Doctors by Howard W. Haggard, M. D. I have the Pocket Book edition of 1940, the fifteenth printing of a work that first came out in 1929.

This is a rambling and engaging popular volume which follows the history of medicine through a variety of approaches, none of which involve footnotes or a bibliography. It frames this history through the window of childbirth, a common biological event, yet one fraught with risk for both mother and child. I wouldn’t recommend this book as a sole reference, but as a source of inspiration for medical fiction, it’s a treasure trove. It doesn’t shy away from lurid tales and speculations, but includes lots of quotes from historical sources, including illustrations and broadsheets from the past. It is, in short, just the sort of work that gets a writer curious, then excited, to learn more.

Mid-way through reading Devils, Drugs, and Doctors, I had an idea for a character, a barber-surgeon, during a problematic childbirth. This is when the true research began. I drilled into Haggard’s text, searching for other references, finding more books, and running my interlibrary loan librarian a bit ragged in my quest for knowledge. It also led me to Kalamazoo, to the International Medieval Congress, an annual gathering of medieval scholars, and a great place to pick up ideas and research materials.

I enjoyed secondary sources like Medicine and Society in Medieval England, and Disease and History, as well as special exhibits like Plague, Poverty, Prayer, hosted by the York Archaeological Society of York, England, which featured medieval images and medical tools. Whenever possible, I turned to primary sources, the documents written by the people of the time. This led me to the Apologie and Treatise of sixteenth century French Barber-Surgeon Ambroise Pare (who also inspired my pen-name), and to Guy de Chauliac, official surgeon to Pope Clement VI, whose 1367 Chirurgia Magna contains detailed instructions for performing medieval surgeries.

At the start of the series, my protagonist, Elisha Barber, works in the backstreets of London, including his role as the most popular barber of Coppice (or Cod-piece) Alley, the street of brothels. Barber-surgeons were the lowest level of medical practitioners, looked down upon by the more educated surgeons, who were, in turn, dismissed as mere craftsmen by the university-educated Physicians.

For the medieval barber, cutting hair, trimming beards, and bleeding patients were all in a days’ work, along with suturing wounds, pulling teeth, and amputating limbs. Most of these operations were performed without benefit of pain killers. Although opium was known at the time, the Catholic Church frequently banned its use, based on the idea that it was somehow unholy to suppress pain (particularly during childbirth, for they should “in sorrow bring forth children,” according to the Bible).

It was precisely this tangle of religion with medicine and compassion that drew me to write about the fourteenth century. Medical novels at any time period are high-stakes. They have implications about the body and the self that people can relate to—everyone knows the dread of themselves or a loved one going under the knife. To do so without anesthetic, or the germ theory of medicine which encourages proper hygiene, is, to many people, a nightmare beyond reckoning.

However, one of the things that fascinated me about the research was the understanding of how little had changed for the medical practitioner. Then, as now, they strove to serve their patients with the best techniques and tools of their time—even if those techniques must be learned by passing around hand-copied texts of medical treatises. Even that most horrifying of medieval surgeries, the trepanation, which requires piercing the skull with a drill to provide access to a compressed skull fracture, was practiced with a high degree of skill and, from the archaeological evidence, a substantial success rate.

Researching the surgery of the fourteenth century gave me valuable and exciting ideas for ELISHA REX and its predecessors. It gave me a better understanding of the precarious nature of health, especially during the Middle Ages. And it gave me a deep appreciation of modern medicine, which no doubt my readers will share. 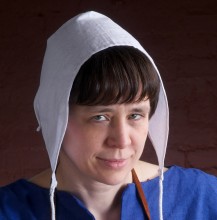 E. C. Ambrose is the author of “The Dark Apostle” historical fantasy series about a medieval barber surgeon starting with Elisha Barber (DAW 2013), and continuing in Elisha Magus (2014) and Elisha Rex (2015). The author blogs about the intersections between history and fantasy on her blog and can also be found at www.TheDarkApostle.com or on twitter @ecambrose. Published works include The Romance of Ruins in Clarkesworld, Carver in Fireside, and Custom of the Sea, winner of the Tenebris Press Flash Fiction Contest 2012. E. C. works as a climbing instructor and adventure guide in beautiful New Hampshire.