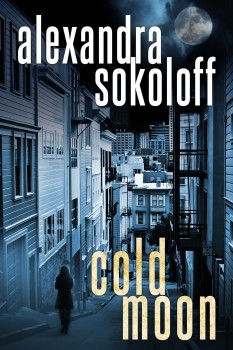 COLD MOON, Book 3 in my Huntress/FBI series, is out this month worldwide in ebook, print, and audio. Anyone who’s read the first two books, Huntress Moon and Blood Moon, knows that I’m very passionate about this series. More than passionate.

I’m writing these books because I’ve had enough of violence against women in fiction and film. Last summer I was at Harrogate, the international crime writing festival. And prominently displayed in the book tent was a new crime fiction release that featured a crucified woman on the cover.

A crucified woman. On the cover.

It’s not like I’ve never come across a crucified woman in a crime novel before. In fact, I’ve had to stop reading three or four novels in the past two years when variations of this scene came up. But on the cover, now? The selling image of the novel?

Last year was also the year of the highly praised TV miniseries True Detective, which featured two complex male detectives and a female cast made up entirely of hookers, dead hookers, little dead girls, a mentally challenged incest victim, and the female lead: a wife who cheats on her husband with his partner because she’s too weak to just freaking leave him. Oh right, there was a female love interest who was a doctor—but she had, I believe, one line in the entire show. Maybe two.

Defenders of the show argue, “But the detectives weren’t sympathetic, either.” No, they weren’t, always, but unlike the entire female cast, they were actual, developed characters, not play toys for the male characters or—well, corpses.

Then there’s Game of Thrones—a series that became unwatchable for me a while ago because of the overwhelming frequency of rapes. Defenders of that show say, “But in that world, in those warring countries, there would be a lot of rape. It’s reality.” But if you’re arguing realism, the boys and male hostages would be raped along with the women—just look at the US statistics of male-on-male rape in our own military. But on Game of Thrones, somehow it’s just the women. Over and over and over again.

And difficult as it is to confront the videogame images dissected in Anita Sarkeesian’s sobering series, “Tropes vs.Women,” I think we can’t afford not to watch and learn. We’re going to have to wake up to the messages teenage boys are growing up with.

Those are just some high-profile examples. Believe me, I could go on all day and not scratch the surface.

So what do we do? How do we counteract the brutalization of women in crime fiction and media?

I suppose as an author you can avoid the issue by writing cozies, or in another genre entirely. But I don’t read cozies, and I wouldn’t know how to write one. I used to teach in the L.A. county prison system. I want to explore the roots of crime, not soft-pedal it. For better or worse, my core theme as a writer is, “What can good people do about the evil in the world?”

So my choice is to confront the issue head on.

The fact is, one reason crime novels and film and TV so often depict women as victims is because it’s reality. Since the beginning of time, women haven’t been the predators—we’re the prey. Personally, I’m not going to pretend otherwise.

But after all those years (centuries, millennia) of women being victims of the most heinous crimes out there, wouldn’t you think that someone would finally say “Enough”?

And maybe even strike back?

So my Huntress Moon series is about just that.

The books are intense psychological suspense, and take the reader on an interstate manhunt with a haunted FBI agent on the track of what he thinks may be that most rare of killers—a female serial.

Now, I’ve been studying serial killers for years. Years ago, when I was a screenwriter writing crime thrillers, I tracked down the FBI’s textbook on sexual homicide before it was ever available to the public. I attend Citizens Police Academies and other law enforcement and forensics workshops whenever I get the chance. If I know there’s a behavioral profiler at a writing convention, I stalk that person so I can pick his or her brain about serial killers. And I attended Lee Lofland’s fantastic Writers Police Academy (a yearly three-day conference that’s a law enforcement and forensics immersion course).

And here’s what’s really interesting. Arguably, there’s never been any such thing as a female serial killer in real life. The women that the media holds up as serial killers actually operate from a completely different psychology from the men who commit what the FBI calls “sexual homicide.”

Even Aileen Wuornos, infamous in the media as “America’s First Female Serial Killer,” wasn’t a serial killer in the sense that male killers like Bundy, Gacy, and Kemper were. The profilers I’ve interviewed call Wuornos a spree killer with a vigilante motivation. (I write about her case, and the psychology of other real life mass killers, in Huntress Moon.)

So what’s that about? Why do men do it and women don’t? Women rarely kill, compared to men—but when it happens, what does make a woman kill?

Within the context of my Huntress series I can explore those psychological and sociological questions, and invite my readers to ask why? I can realistically bring light to crimes that I consider pretty much the essence of evil—and turn the tables on the perpetrators.

I do not depict rape or torture on the page. I can assure you, no one gets crucified. I think real life crime is horrific enough without rubbing a reader’s face in it or adding absurd embellishments (my personal literary pet peeve is the serial killer with an artistic streak or poetic bent).

In this series I can pose questions about human evil, as it actually presents itself in real life, without exploiting it. And I’ve created a female character who breaks the mold—but in a way that makes psychological sense for the overwhelming majority of people who read the books.

Whoever she is, whatever she is, the Huntress is like no killer Agent Roarke—or the reader—has ever seen before. And you may find yourself as conflicted about her as Roarke is.

Because as one of the profilers says in the book, “I’ve always wondered why we don’t see more women acting out this way. God knows enough of them have reason.” 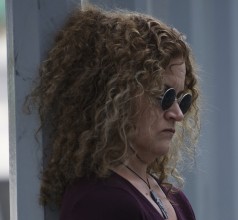 Alexandra Sokoloff is the bestselling, Thriller Award-winning and Bram Stoker and Anthony Award-nominated author of eleven supernatural, paranormal and crime thrillers. The New York Times has called her “a daughter of Mary Shelley” and her books “Some of the most original and freshly unnerving work in the genre.”

As a screenwriter she has sold original suspense and crime scripts and written novel adaptations for numerous Hollywood studios. She is also the workshop leader of the internationally acclaimed Screenwriting Tricks for Authors workshops, based on her Screenwriting Tricks for Authors workbooks and blog. Her Thriller Award-nominated Huntress Moon series, following a haunted FBI agent on the hunt for a female serial killer, is out now.