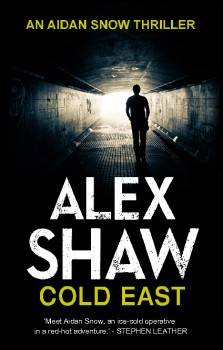 UK author Alex Shaw has built an international following with his thrillers featuring MI6 operative, Aidan Snow. They include Cold Blood, Cold Black, and his latest COLD EAST. He has also written several stand-alone books, has had works published in numerous anthologies, and recently penned a novella for Amazon’s Kindle Worlds platform.

Alex and his family divide their time between homes in the UK and Ukraine; where many of his books are set. Alex’s personal insight into the politics and daily life of Eastern Europe flavours his work, adding a rich authenticity to his writing.

Australian thriller writer, Liam Saville recently caught up with Alex for a chat about his latest book, COLD EAST.

Alex, for those readers who may be new to your books, can you tell us a little about Aidan Snow the man; what makes him tick and what are his inner demons?

Aidan Snow is a former SAS trooper turned operative for the Secret Intelligence Service (SIS), commonly referred to as MI6. His father was a diplomat and Snow spent his formative years in East Germany and then Moscow. He has a strong sense of social justice which has on occasion put him on the wrong side of events. In the first Aidan Snow thriller, Cold Blood, he was suffering from post-traumatic stress disorder, whilst on the run in Ukraine, accused of murder.

That’s interesting; I know PTSD is a significant issue for many soldiers from both our countries who have recently returned from Iraq and Afghanistan, so it’s refreshing to see an author tackle this issue. It’s been said that thrillers can be very plot driven, and not so big on character development. I know that’s not the case with your books, and with that in mind, if you had to liken Aidan Snow to another well-known literary character, who would it be, and why?

I think that’s an easier question for a reader to answer than me, I didn’t set out to copy anyone, but by virtue of the genre there will be some comparisons. Snow gets the bad guys in the end but I think he’s more cerebral than the “action man” stereotype. He gets injured and sometimes luck plays a part in his success. I wanted to build a three-dimensional protagonist based on my own experiences. For example, when we first meet Aidan Snow he’s teaching at an International School in Kyiv and enjoying life as an ex-pat—which is what I was doing at the time I wrote Cold Blood. I must point out however that I was not in the SAS.

It would almost be remiss of me not to ask this next question. COLD EAST is an extremely topical book, set as it is amidst the crisis in Ukraine, a country that I know you have a great affinity for. How much of the book is inspired by current events, and why did you choose to write about this?

A theme of COLD EAST is “Russian aggression,” a term that we now take to mean Putin’s actions in and towards Ukraine. I wanted to find a way of taking a thriller construct, i.e., a Jihadi terrorist cell with a Western target, and intertwine this with events in Ukraine whilst acknowledging the legacy of the Chechen and Georgian conflicts. I didn’t want to be didactic or detract from the salient point of the book, which after all is to entertain. What I hoped to achieve was to explain my take on real world events and shed light on some lesser known facts. If at least one reader, after enjoying the book, understands the Ukrainian crisis a little more and questions “the Kremlin line,” I’ll be happy.

What term would you use to best describe your work?

I write thrillers that are set partly in Ukraine. If I had to call my work anything I’d call it “Ukrainian noir.”

I like that, Ukrainian noir; it’s fitting, and I don’t think it will be too long before we’re seeing other authors incorporating Ukraine into their works. Changing direction slightly, as an author myself, I know that there is a tremendous amount of work that goes into writing a novel. Part of this is researching the topics you are writing about. Can you tell us a little bit about the research that went into writing COLD EAST and your other Aidan Snow books?

Like most authors, and criminals, I use Google Earth and Streetview to check out new locations for my crimes. I do tend to write about places I’ve been to or lived in—Ukraine, Russia, and the Middle East—as I think that first-hand experience does make writing richer. When I can, I write on location. Some of COLD EAST was penned in Ukraine. I of course use various Internet resources to research things I know little about. I can and do write myself into corners on technical details, so I’d be lost without Wikipedia! I’m lucky that I have contacts in Ukraine with knowledge of Ukrainian intelligence and law enforcement procedures. Research is important but nothing tops creativity and the use of artistic licence.

In addition to the Aidan Snow series you’ve written a vampire-themed military horror novel, and a post-apocalyptic novella for Amazon’s Kindle Worlds platform. What can readers expect in the near future from Alex Shaw?

I’m working on two distinct novels at the moment, both crime thrillers. One is set in Kyiv and the other in Brighton, UK. I’m also writing more for Kindle Worlds. In January I’ll start on the next installment in the Aidan Snow series.

Thanks for your time, Alex. It’s been fantastic chatting with you. 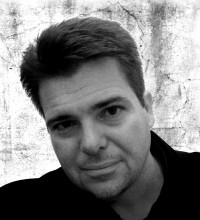 Alex Shaw spent the second half of the 1990s in Kyiv, Ukraine, teaching and running his own business consultancy before being head-hunted for a division of Siemens. The next few years saw him doing business for the company across the former USSR, the Middle East, and Africa. He is a member of the International Thriller Writers organisation, the Crime Writers Association and the author of the Aidan Snow SAS thrillers. Alex, his wife and their two sons divide their time between homes in Kyiv, Ukraine and Worthing, England.