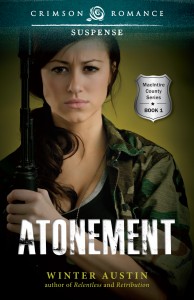 Winter Austin’s latest release delves into a subject matter that has become a matter of importance in our nation: helping our service men and women who are suffering from PTSD, and the high rate of suicide among those who have served. She delicately attacks this while handling the mystery and suspense of a rash of suicides plaguing a small Southeast Iowa town.

McIntire County deputy Nicolette (Nic) Rivers moved to the small town of Eider, Iowa to forget what she experienced as a Marine Scout Sniper, and to heal without family interference. What she’s not expecting is to, once again, use her sniper skills to end a domestic situation. Her single shot turns the sleepy town of Eider on its head, secrets begin pouring out, and citizens of McIntire County turn up dead—presumably by their own hand. With the assistance of Eider police detective, Con O’Hanlon, Nic sets out to learn why the suicides are happening, and face her own demons, hoping she doesn’t succumb to the same fate.

ATONEMENT is your newest release, what inspired the title, and for you to write this book?

My husband is retired from the military, and nine years ago we were preparing for his one and only deployment. During that time a nugget of the story idea came to me. We knew many people who had deployed and came back suffering from mild to severe PTSD. Almost all of my books have a character who is or was military, and with that I knew I had to one day write a book on this subject of PTSD.

Fast forward to 2012, early spring the character Nicolette Rivers was born, and with her came a serious load of baggage that wouldn’t leave me alone. Her story nagged at me until last year when I was able to finally work on her book. Nic is also my first dip into fast-tracking certain aspects that aren’t currently happening in the military. She is the first female Marine Scout Sniper, and it’s because of that job she’s suffering. My hope is that readers will get a better understanding of what actually goes on inside the head of someone suffering from PTSD. Nic’s story is probably the darkest one I’ve written yet.

As for the title, atonement plays a huge role in the suicides that are happening in Eider. Atonement has some deep religious connotations, and for Nic, who is seeking her own atonement for the things that occurred in her past.

You’ve placed the setting of your book in a small town in Iowa. Why there?

When I was between books, my agent, at the time, challenged me to answer a few core questions about what type of writer I was. They always say, write what you know, and I knew Iowa, oh how I knew Iowa. It’s my home state, and after having moved back to it, I could give the reader a rich description of the setting.

Most people don’t think of Iowa as being all that thrillerish, but there have been some very interesting, and disturbing, situations and murders that have taken place in the state. And with my limited timetable, I don’t have to work in research trips, because I live a lot of what goes on.

There are currently no female snipers in the Marines, what led you to writing Nic as one?

I’m a stickler when it comes to writing accuracy in my novels, but in the case of Nic, I had to take fictional license. When I started writing ATONEMENT back in 2012, there had been a huge push to allow women to actually train and serve in combat infantry units in the marines and army. By the time I finished writing the book, only a handful actually made it, and the Marine Corp was discussing allowing women to try for sniper positions.

Nic’s backstory opened the door for her to be the first female Marine Scout Sniper. Her experiences, her life as the daughter of a career Marine, it just said, she’s the one to break the final barrier. I couldn’t have written her in any other career and still had the type of story come out of this book. And that’s the beauty of being a fiction author, sometimes we just get to do things that haven’t happened, yet.

Do you have any unusual writing habits?

Not really. I’ve recently rejoined the workforce and I’m trying to find a way to write more around my work hours. I’ve always been an early riser, so naturally I try to get up an hour before I need to and get an hour worth of writing in. Doesn’t happen quite like I would like, especially when I’m deep in the middle of volleyball season, but I make do.

What authors or books have influenced you? What’s on your TBR pile?

Because I write romantic thrillers, I tend to lean heavily toward flat suspense/thriller books while writing. The authors range anywhere from Iris Johansen to Karin Slaughter to C. J. Box. The gritty, dark side of their writing has helped me create some hairy situations for my own characters.

I’m writing the next book in the series with the working title of Born to Die. In ATONEMENT you meet Nic’s sister Cassandra (Cassy) Rivers and the thorn in her side, FBI Agent Boyce Hunt. Born to Die is set two years after the events of Atonement and brings Cassy and Boyce back together when an Eider police officer is murdered after several convenience stores and a bank are robbed. I’m playing with a modern day Bonnie and Clyde situation in this book.

Winter Austin perpetually answers the question “were you born in the winter?” with a flat “nope.” Living in the middle of Nowheresville, Iowa, with her husband and four teenagers, Winter is trying to juggle a career as a volleyball coach while writing deadly romantic thrillers.