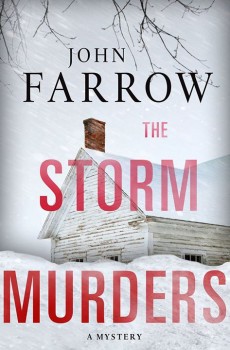 John Farrow (pen name of author/playwright Trevor Ferguson) lives in Hudson, Ontario. I live in New York City. This makes him my first interviewee for The Big Thrill I’ve not had the opportunity to meet face to face. But, as chance would have it, it looks like that’s going to change soon. New York City’s only remaining independent mystery bookstore, The Mysterious Bookshop will be hosting the launch of John’s latest Emile Cinq-Mars mystery, THE STORM MURDERS, on June 3rd. (“I am exceedingly grateful,” said John.)

“Gotta love independent bookstores! My dream is to see them flourish once again. Some of these brick and mortar establishments may be coffee and books, or gifts and books, but to have people in stores sharing recommendations and joys—that’s priceless. I’d also like to give a shout out to The Poisoned Pen in Scottsdale, Arizona, and one of my long time favourites, The Owl and the Turtle in Camden, Maine.”

(The red spell check line is telling me to change the way John spelled the word “favourite.” I’m leaving it; he’s from Canada.)

One thing that fascinates me about John is that in addition to being the author of eleven novels, he’s also written four well-received plays. What’s the connection?

“Writing plays helped me to advance the use of dialogue in my novels. You can’t just allow two actors to stand on a stage and talk without something being at stake. Two people talk, and that conversation is driven and underscored by ego and insecurities and by competing agendas, but at its core the necessary contest is between the known and the unknown: which also happens to be the pulse of crime fiction. Characters fear what remains a mystery, and what remains unknown undermines their conviction in their own knowledge. That tension cuts through what people say to each other, and in this way all talk is a contest, a way of soliciting and procuring knowledge—and concealing it—which in turn creates more anxiety over what remains a mystery. God I love dialogue!”

I wondered if being a playwright had any influence on the way John “pictures” scenes in his novels.

“I’ve always believed in scenes that are both cinematic and atmospheric. (Not always the same thing.) As a playwright, seeing how a lighting genius can play around with effects (and lighting intensity) during rehearsal and adjust the mood with his artistry, that has left an impression. I learned to experiment with my own linguistic intensity, ever so slightly sometimes and to great effect.”

What about characters in plays compared to novels? Do you write them differently?

“Every character (on stage) must be reacting at all times. I think this has worked its way back to my crime novels, which have a larger canvas, obviously. The stage is claustrophobic, but I revel in claustrophobic, intense scenes where there’s nowhere to run or hide.

“Not a disinterested line is a mantra for writing plays. I try to take that back to my novels as well—even though one of my crime novels runs to a thousand pages—and hope that my readers feel the same way, that this moment and the next is critical.”

Judging from the critical acclaim his novels have received, that hope has been more than realized. Now, about being from Canada: any differences between Canadian crime novels and the ones written by Americans?

“We have more winter. Being late to the party, Canadians are not as steeped in the genre. Besides the cultural and geographic differences, where we might differ is that Canadians are more diverse in the reading material, at least while growing up. The British influence is often equally as strong a pull as the American, and in some writing I believe that shows up. Americans are more likely to be down with the cool, the British more prepped for the eloquent, and Canadians tend to dabble with both fonts and see what they can make of that.”

Okay. Novelist. Playwright. You’d think that’d be enough to fill your days, right? Not for Mr. Farrow. John also teaches Creative Writing. I’ve always been curious about how much of a role talent plays in the study of writing. Talent can’t be taught, can it?

“No one assumes that every piano student will perform at Carnegie Hall. It’s also not probable that every Creative Writing student is bound to be the next Stephen King or Cormac McCarthy. Yet an appreciation for the task at hand can be taught, and insight into the discipline passed along, and knowledge of the wonders and the demands of writing communicated so that students know where they fall short and how they may be gifted. I guarantee that every student who comes into the room in September will leave a better writer in April. The process allows people to appreciate writing from the inside out, to try it themselves and to test themselves. That’s a good thing.”

So, final question: you get a call from the folks at ThrillerFest and they offer you the chance to put together a dream panel—including you. Who’s on it and what’s the topic? And there’s no need to limit the panelists to those writers still living. I have no bias against dead writers.

“If this is a dream panel, let’s make it a grab bag, a mix that doesn’t necessarily match but bring disparate writers into a brouhaha. Let’s start with Karin Slaughter, she rocks and has the best name ever. How about Daniel Stashower as our moderator because I know he can keep things lively and add an historical perspective. We’ll bring in James Ellroy because he likes to talk large and bluster to a degree. We’ll need to counter the bluster, so shall we add a quieter but no less authoritative voice? I’m thinking James Lee Burke and/or Michael Connelly. If the dead must be represented in their ghostly flesh, then lets’ provide a seat at the table for Elmore Leonard.”

And for the topic?

“How Can Crime Fiction Today Save the World of Tomorrow Without Really Trying? You know, something so open-ended so we can see how the sparks fly.” 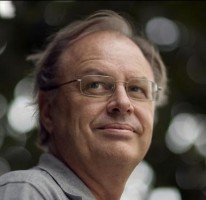 Trevor Ferguson, a.k.a. John Farrow, is the author of eleven novels and four produced plays. The first of his crime novels, City of Ice and Ice Lake (John Farrow) were published in seventeen countries to extraordinary critical acclaim. Booklist wrote: “… a character-driven mystery of the highest order, yet it also boasts one of the most confounding, architecturally inventive plots imaginable.” With the publication of Ice Lake, Booklist called the series “the best of our time.” Die Zeit in Germany called the series “the best of all time.” River City, the third in the series and a thousand pages long, delivers 450 years of Montreal history written as a crime/thriller.

He is also the author of seven literally novels and four produced plays. The crime series continues with a new trilogy and the same detective, SD (now retired) Émile Cinq-Mars, beginning with The Storm Murders (Minotaur) in May, 2015, Seven Days Dead and The Talisman Quarry (all Minotaur), both in 2016. John Farrow lives in Hudson, Quebec.