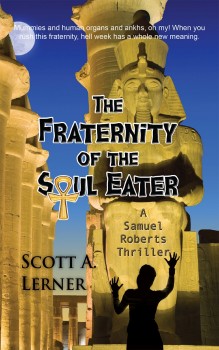 It’s been a while since Samuel Roberts was called upon to save mankind, and he’s getting restless. His girlfriend Susan thinks he’s a danger junkie, and he’s worried he has a hero complex. So Sam’s back to his usual small-town lawyerly duties in Champaign-Urbana, handling divorces and helping people beat DUI raps.

Until a young fraternity pledge calls.

During an initiation ceremony the pledge witnessed the live sacrifice of a young woman, but he had so much alcohol in his system that no one believes him. Except Sam. Lately Egyptian lore has been creeping into his life, his dreams, and his movie preferences, and he’s pretty sure he knows why. Evil is knocking on his door again.

THE FRATERNITY OF THE SOUL EATER is Scott A. Lerner’s third novel starring Sam Roberts. Fans of the series are already familiar with the paranormal elements in his books, and with zombies and demons badges already earned, he now tackles another of the all-time reader’s favorite topics: Ancient Egypt.

Of the traditional monster gallery of werewolves, vampires, I’ve always had a fascination with mummies and anything pyramid-related, so I was thrilled by the opportunity to catch up with Lerner about his exciting new book.

How did the idea for THE FRATERNITY OF THE SOUL EATER come about?

I live in Champaign, Illinois, and the University has one of the largest fraternal systems in the country. I’ve always seen fraternities as being secretive, with strange rituals and traditions. “Strange and secretive” seems like excellent material for a thriller.

I’m fascinated by Ancient Egypt, a society with many macabre rituals and traditions and Ancient Egypt was a whole society obsessed with the dead. Among the more terrifying of the Ancient Egyptian deities was the Soul Eater.

Fraternities and Ancient Egyptian Gods at first don’t seem to go together—like peanut butter and chocolate. Yet, what better place to sacrifice co-eds and avoid detection? A large Midwestern University is a perfect place to go about your evil business without being scrutinized. At the same time, it has a museum and brilliant professors. Thus, there are the people and infrastructure to turn an evil dream into a nightmarish reality.

What can you tell us about the Samuel Roberts?

Sam is special in the sense that he is so ordinary. He has no superpowers, yet he is called upon to do extraordinary things. He’s often afraid and confused, but also tenacious and willing to die for a righteous cause. Sam is a skeptic by nature, but is willing to believe the impossible if evidence backs it up.

Since this is the third book after Cocaine Zombie and Ruler of Demons, how has Sam evolved since the last novel?

Sam’s evolution has been extreme. In Cocaine Zombies he did what he had to do. He, in some ways, had to compartmentalize the supernatural. It was all about saving the world and less about understanding dark magic. In Ruler of Demons, he had to be dragged into the fray while stubbornly resisting the idea that evil and demons were real.

In THE FRATERNITY OF THE SOUL EATER, Sam is in a very different place. He is depressed at the ordinariness of his life. It is hard to concentrate on boring reality when you know there is a whole other world of the paranormal out there. At the same time he is afraid to get involved with the forces of darkness once again. He must struggle to accept that his destiny might be to battle supernatural evil. He also must come to grips with what that destiny may cost him.

Without giving away the plot, can you elaborate on the antagonist?

There are many antagonists. Some of them are Ancient Egyptian deities. In some ways, the most frightening are regular people—regular people with money and power, but lacking in moral clarity. People doing things because they can be done, and not because they should be done. People willing to disregard the value of human life. Or at least, to trade it away for power and riches.

You seem to be the only real-life law-practice in Champaign, as opposed to Samuel’s fictional practice, how did that happen and why?

I wanted to write about what I know so I gave Sam a similar job. However, our similarity ends there. I have never needed to step into the fray and battle the forces of darkness. If I had to battle Voodoo spirits, demons, and Ancient Egyptian deities, the world would be in trouble.

Being a lawyer involves interviewing people and investigating stories. Also, working on his own, Sam can manipulate his schedule a little better than if he had a regular nine to five job. Besides, I’ve been told many times that lawyers work closely with the forces of darkness.

Most of the research was done with the help of the Internet. I delved into the history of the fraternal system, the history of the University, and the rituals of Ancient Egypt. I am always impressed by how much information is readily available.

The Wicca Witch of the Midwest. It should be coming out in time for the Halloween season. It takes place in an Amish area of central Illinois and involves some very dark magic. There are children disappearing, murders, and a community of witches trying to hold the perpetrator responsible. The alleged perpetrator is among the most powerful witches in the village. There is no shortage of evil, black magic, and blood sacrifice in this tale. Sam and Bob have their work cut out for them.

Author and attorney Scott A. Lerner resides in Champaign, Illinois. He obtained his undergraduate degree in psychology from the University of Wisconsin in Madison and went on to obtain his Juris Doctor degree from the University of Illinois in Urbana Champaign. He is currently a sole practitioner in Champaign, Illinois. The majority of his law practice focuses on the fields of Criminal law and Family Law.Mr. Lerner lives with his wife, their two children,and their cat Fern. Mr.Lerner collects unusual antiques and enjoys gardening, traveling, reading fiction and going to the movies. Cocaine Zombies is his first published novel followed by Ruler of Demons. The Fraternity of the Soul Eater is his latest book.