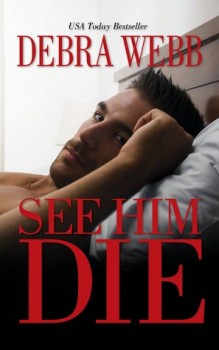 Julie Barton is in serious trouble. She recently discovered that her husband is a cheater. If that isn’t bad enough, she also learned that the man she thought she knew and loved is deeply involved in illegal activities. When she walked out, determined to start over, she had no idea just how far the man who had vowed to love and to cherish her would go to make her sorry until she found him murdered–in her bed. Now, the only person who believes her story is, unfortunately for Julie, the one man with the most to gain from the murder.

SEE HIM DIE is available from Amazon.

DEBRA WEBB, born in Alabama, wrote her first story at age nine and her first romance at thirteen. It wasn’t until she spent three years working for the military behind the Iron Curtain and a five-year stint with NASA that she realized her true calling. A collision course between suspense and romance was set. Since then she has penned more than 100 novels including her internationally bestselling Colby Agency series. Don’t miss a single installment of her romantic thriller series, the Faces of Evil! Visit Debra at www.thefacesofevil.com or at www.debrawebb.com. You can write to Debra at PO Box 10047, Huntsville, AL, 35801.