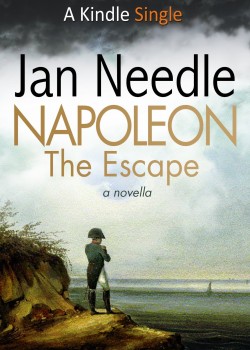 Despite the hatred Napoleon Bonaparte brought down on himself and France during twenty years of total war, when the British exiled him to rot away his life on the island of St Helena twelve hundred miles from the nearest land, vast fortunes were mobilised to set him free. His empress wife refused to join him on the ‘volcanic pimple,’ the governor mobilised eleven warships and many hundred men to guard over him, but spies, war heroes and would-be rulers of a new empire in South America plotted ceaselessly to snatch him from his ‘living death.’ Women swarmed to make his life more bearable.

The American Robert Fulton – inventor of the world’s first submarine – teamed up with an Irish smuggler called Tom Johnson to strike deep into the Atlantic to snatch the fallen emperor to freedom. A young English sea captain, Samson Armstrong, set sail to escort them, with his wife Eliza and a beautiful exile from St Helena, Lucy Balcombe. In her arms there was her baby Jules – whose father, she insisted, was Napoleon.

Desperate men were waiting on the island to receive him – Bonaparte had at least two doubles and many trained assassins – but there were dangers, too. His personal surgeon, Barry O’Meara, had been involved in many mystery deaths, and it has long been held that arsenic poisoning was running riot. There were soldiers too – and scorned and jealous women. On a certain pitchblack midnight, at least two factions fought for the emperor, either to save or kill him. And bizarrely, the exact result has been a mystery ever since.

NAPOLEON is available from Amazon.

Jan Needle writes many kinds of thriller, from World War II through drugs, gang crime, and good old straightforward murder. Most of them have a pretty hard edge, and his historical books, mainly about naval warfare, approach the genre from a less than romantic viewpoint. His first sea thriller, A Fine Boy for Killing, was described as ‘Jack Aubrey with the gloves and rose-tinted spectacles torn off,’ and he’s currently working on a series on the life of Nelson. His latest book is a riff on the eternal mystery of Napoleon’s last years. Exiled to a barren rock a thousand miles from nowhere, his death was as sudden as it was mysterious. Was he murdered, and if so, how? Poison has long been the most usual suspect, but it is known that there were many people determined to get to him – armed, rich and desperate men. There is also the widely-held belief that he might have been snatched in an American-designed submarine. Snatched to what? A different place of exile, or a miserable and lonely death by drowning.