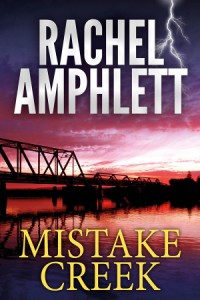 When Nina O’Brien returns to the small town of Mistake Creek after ten years, she’s in a race against time to protect her father’s business from an incoming storm so it can be sold to pay for his urgent medical treatment.

As flood warnings echo over the radio and the storm breaks with enormous force across the tiny Californian community, Nina is joined by others seeking shelter from the onslaught.

Her life is changed forever when a stranger appears at her door, bloodied and incoherent.

With a ruthless killer exposed among the small group, Nina is thrust into a deadly conspiracy involving a military veteran seeking revenge and an FBI agent desperate to prevent a catastrophic terrorism threat.

Alone, with no means to raise the alarm, Nina realises that to save one man, she must learn to trust another.

MISTAKE CREEK is available from Amazon, iTunes and Kobo.

Before emigrating to Australia in 2005, Rachel Amphlett helped run a pub, played lead guitar in bands, worked as a TV and film extra, dabbled in radio as a presenter and freelance producer for the BBC, and worked in publishing as a sub-editor and editorial assistant.

After returning to writing, Rachel enjoyed publication success both in Australia and the United Kingdom with her short stories. Her first thriller White Gold was released in 2011, with the Italian foreign rights for the novel being sold to Fanucci Editore’s TIMECrime imprint in 2014.

She is currently working on the third in her Dan Taylor military thriller series, due for publication later this year, and plotting the next two books in that series.