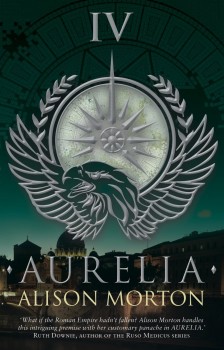 Late 1960s Roma Nova, the last Roman colony that has survived into the 20th century. Aurelia Mitela is alone – her partner gone, her child sickly and her mother dead – and forced to give up her beloved career as a Praetorian officer.

But her country needs her unique skills. Somebody is smuggling silver – Roma Nova’s lifeblood – on an industrial scale. Sent to Berlin to investigate, she encounters the mysterious and attractive Miklós, a known smuggler who knows too much and Caius Tellus, a Roma Novan she has despised and feared since childhood.

Barely escaping a trap set by a gang boss intent on terminating her, she discovers that her old enemy is at the heart of all her troubles and pursues him back home to Roma Nova…

AURELIA is available from Amazon, Amazon UK and iTunes.

“Morton raises the bar on her Roma Nova series with a thrilling and intriguing history of what might have been. Effortlessly weaving fact and speculative fiction, AURELIA explores a 1960s that is at once familiar and and utterly different – a brilliant page turner that will keep you gripped from first page to last. Highly recommended.” – Russell Whitfield, author of the Gladiatrix series;

‘What if the Roman Empire hadn’t fallen? Alison Morton handles this intriguing premise with her customary panache in AURELIA.’ – Ruth Downie, author of the Ruso Medicus series

“Yet again, Ms Morton delivers a fast-paced story set in a world slightly – but fundamentally – different from our own. Roma Nova as a country does not exist – not really – but Ms Morton paints this alternate world of hers with such colours, such details, that by the time the book has ended it comes as a surprise to return to a world without Roma Nova, without strong, impressive women like Aurelia Mitela. I am already looking forward to the next instalment – in fact, I crave a next instalment!” – Anna Belfrage, author of The Graham Saga

“Meticulously researched. Wonderfully imagined. Alison Morton’s Roma Nova will stay with you long after you have closed the pages.” – Liesel Schwarz, author of Chronicles of Light and Shadow

But something else fuels her writing… Fascinated by the mosaics at Ampurias (Spain), at their creation by the complex, power and value-driven Roman civilisation started her wondering what a modern Roman society would be like if run by strong women…