The Art of Being True 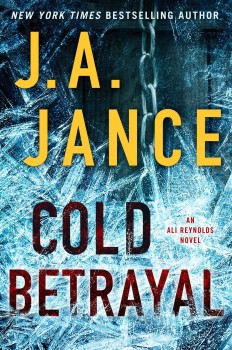 New York Times bestselling author J. A. Jance can trace her love of literature all the way back to elementary school where she was introduced to the magical world of Frank Baum’s Wizard of Oz series.

She was, of course, fascinated by the stories, but even then, as an impressionable second-grade student in Mrs. Spangler’s class, Jance sensed “the author” behind the curtain and quickly realized that that is who she wanted to be—the person putting the words on the page.

Since 1982, Jance has been doing just that, with her latest thriller COLD BETRAYAL marking her fiftieth novel. More than twenty million copies of her books are in print, and they have been translated into eighteen languages—an impressive resume for any author.

Perhaps even more so for Jance, whose initial start as an author was met with daunting resistance.
While her passion for writing sparked at an early age, that flame was extinguished by her first husband, an alcoholic who declared that there would be only one writer in the house—and she wasn’t it.

For years, Jance penned poetry during the dark of night, hiding it away in a strong box so her husband wouldn’t catch her doing what, by his estimation, she shouldn’t be doing.

“When I wrote poetry, I thought I was being ‘true to my art,’” she says. “Years later, after my husband died—of chronic alcoholism at age forty-two—I had to go into the strong box for documents. And that’s where I found those old yellowed pieces of notebook paper and the poetry I’d jotted on them.”

Reading them back was like seeing her life on instant replay, and Jance suddenly understood, she hadn’t really been true to her art at all.

Instead, “I had been true to being a writer and using words to grapple with the essential issues of my life.”

The words may not have satisfied Jance’s artistic desire at the time, but they didn’t go to waste. These poems became Jance’s first published work, a memoir in poetry and prose. After the Fire remains in print, and though Jance has since carved out an impressive—and important—niche in the thriller market, the book not only provided a catalyst for her career, but also another turning point in her life.

During a chance reading of the memoir, Jance met Bill, a widower whose wife had passed away two years to the day after Jance’s first husband. They struck up a conversation, married six months later, and in Jance’s words, “he’s spent the past thirty years being nothing but supportive.”

In reality, it was a long time before Jance’s writing amounted to anything more than fun money—the Improbable Cause trip to Walt Disney World; the Minor in Possession memorial powder room; the Payment in Kind hot tub. Eventually, things changed dramatically, allowing Jance the opportunity to “repay” her husband’s unwavering support with early retirement and a never-ending golf green.

“Our first indulgence was to buy two brand new cars,” she says. “He got a 1994 Suburban, and I got a Lincoln Mark VIII.”

Many years later, the Lincoln has been replaced, but Jance’s love of storytelling continues to thrive. At current pace, she delivers two full-length books a year, the first of 2015 being COLD BETRAYAL, the eleventh novel in the Ali Reynolds series. In this book, former TV newscaster turned fearless blogger explores a dangerous cult where women and girls are treated as something less than second-class citizens.

COLD BETRAYAL reunites Ali with her longtime friend and Taser-carrying nun, Sister Anselm, and is also the first book after the newly married Ali is gearing up to…well, to settle down.

“There is a point in this book when Ali comes up against the fact that if she expects [her husband] to let her step into the line of fire, then she’d better not tell him to back off, either,” Jance says.

It’s one of the many ways this character has grown.

Of course, Ali is just one of the familiar faces Jance’s fans have grown to love over the years. Other books feature detective J. P. Beaumont, female sleuth Joanna Brady, and the entire (fictional) Walker family.

“Writing series characters allows me to return to familiar places and people,” she says. “Writing a new book in a series is like having a chance to visit with an old set of friends.”

Which is why it’s unlikely Jance fans will see a standalone thriller from her anytime soon. Next up is Stand Down, a Beaumont novella, and then, in July 2015, the fifth book in Jance’s Walker series, Dance of the Bones.

It may appear there’s no rest for the weary, but for Jance, who missed out on following her dreams earlier in life, the writing is the most exciting—and critical—part of the gig.

“When I bought my first computer in 1983—a dual-floppy Eagle with 128K of memory—the guy who installed my word processing program, Spellbinder, fixed it so when I booted up my computer in the morning, these are the words that flashed across the screen: A WRITER IS SOMEONE WHO HAS WRITTEN TODAY.

“Today, I have spent my day being an author on tour. Today I have done no writing, so today I am not a writer.”

Perhaps. But as millions of fans would agree, Jance is one of the best in the genre, whether she’s at the keyboard, or simply inspiring fellow scribes to fully be true to their art—no excuses.

To learn more about J. A. Jance, please visit her website.

A Crime Writer’s Guide to Raising Kids by Allison Brennan