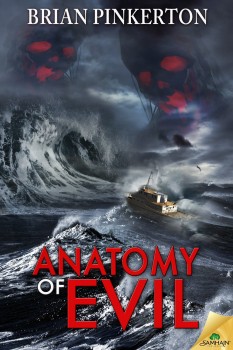 Brian Pinkerton began his career writing screenplays which streamlined into the cinematic style of his novels that Horror Novel Reviews claims brings back “the feel and style of some of the genre’s masters from decades ago.”

Brian crafts stories that frighten, amuse, and intrigue while often beginning with a “what if?” question. From this first question he then usually leads ordinary people down extraordinary roads to a living Hell.

His newest release, ANATOMY OF EVIL, takes us out of our comfort zone again when an island paradise vacation for a group of friends twists into a nightmare journey through the darkest corners of the human soul, leading to the ultimate showdown between good and evil.

Brian, how did you come up with the idea for ANATOMY OF EVIL?

I have a notebook stuffed with ideas. I’m always adding to it, random concepts that pop up in my head. A small number of them pass the audition process to become novels or short stories. The plot for ANATOMY OF EVIL was scribbled in the notebook under the original title of “Unleashing Hell.” What if a portal to Hell existed someplace on earth?

Tell us about the group of friends in ANATOMY OF EVIL and how their lives are intertwined with their shared experience.

ANATOMY OF EVIL features a group of friends united by their commitment to bring good to the world. They serve together on the board of a community service organization. They are the nicest, gentlest souls you could ever imagine. Then something happens that exposes their darkest, hidden impulses. They begin to change in shocking ways. They become pawns in a much bigger battle between the forces of good and evil.

Why did you choose the island of Kiritimati as the setting in ANATOMY OF EVIL? Did you conduct research for the writing of it?

I wanted a remote location with a history of nuclear testing and discovered the story of Kiritimati. Kiritimati Island was a major military test site in the 1950s and early 1960s, located in the middle of the Pacific Ocean. I read the autobiography of a British soldier stationed there who experienced firsthand the effects of experimental bomb blasts, both physically and mentally. I researched reports of modern-day tourists who visit the island for its spectacular fishing. I blended the two. What if a group of vacationers encountered lingering aftereffects of the nuclear testing? What if there was a bomb that disturbed not only the earth’s atmosphere but reached into the heavens and Hell?

What’s the most bizarre research experience you’ve encountered in writing your novels?

For my novel Vengeance, I wrote an entire chapter in gang slang. I wanted to get the language and rhythm of a gang leader’s voice. I went online and discovered a chat room where local street gangs were engaging in some lively exchanges. A lot of the banter was heavy with cryptic wordplay and euphemisms, but the overall tone was very violent and threatening. I was careful not to provoke anybody.

How is ANATOMY OF EVIL different from your other novels?

I’ve written several books about good people who get caught up with bad characters and quickly spiral into deadly situations. In ANATOMY OF EVIL, the good people become the bad characters. The evil isn’t a threatening force from the outside. The evil infests them from within.

Where do your dark stories come from? Experience…or your own fears?

I’m drawn to dark fiction, movies, and music but I don’t lead a dark life. My life is pretty ordinary and upbeat. My books are a vacation from normalcy, an opportunity to go on fantastic and dangerous journeys within the safety rails of fiction. I write about things that frighten or fascinate me and see how far I can take them.

Would readers say there is a Brian Pinkerton writing style they can count on? What would that be?

I hope they find the writing to be fluid and energetic, with a good rhythm and forward momentum. I want the stories to be credible with identifiable characters, even when the situations become outlandish.

I want people to have a difficult time putting the book down. My favorite responses from readers are the ones that go “damn it, you kept me up all night!”

You write horror in thrillers to humor in comic strips and are noted for telling stories “to frighten, amuse, and intrigue”. How do you combine the humor with the terror in your thrillers and make it believable?

I like using humor in my books as an occasional release valve after building tension. I have to do it carefully so I don’t undermine the story’s credibility or suspense. I use a lot of humor in my zombie series, How I Started the Apocalypse. I did it partly because the genre is so exhausted that satire was the only way I could have fun with it.

A lot of my book humor comes from placing characters in unfamiliar situations. In Vengeance, the main character is a mild-mannered high school English teacher who is thrust into the role of assassin. His predicament gets more and more complicated as he tries to extract himself. It’s funny and nerve-wracking.

In ANATOMY OF EVIL, the characters start acting in ways that contradict their true nature. It’s funny in the beginning and then becomes more and more disturbing.

There’s a rumor that you handwrite your novels. Does your Journalism degree have any influence over this routine? And what advantage does this bring to your writing?

I handwrite the first two drafts of my books. The handwriting habit actually started with cartooning. I’ve been drawing cartoons since I was very young. Being creative comes natural to me with a pen and paper. It frees me up. My brain isn’t always linear. I like to dance around the page.

You began as a screenplay writer. How does this feed into your cinematic approach to writing novels?

I can see my stories unfold visually like a movie, but I am very careful to use all the senses in describing them for a novel. If you just write what you see, you wind up with flat writing. I like to get under a character’s skin. What do they smell, hear, touch, feel, and think?

Screenplays, above all, taught me the value of crisp, uncluttered writing. Every sentence serves the story. There’s no fat. 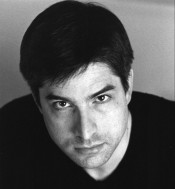 Brian Pinkerton tells stories to frighten, amuse and intrigue. His novels include Anatomy of Evil, Killer’s Diary, Abducted, Vengeance, Bender, Rough Cut and How I Started the Apocalypse. Select titles have also been released as audio books and in foreign languages. Brian’s short stories have appeared in Chicago Blues, PULP! and The Horror Zine.