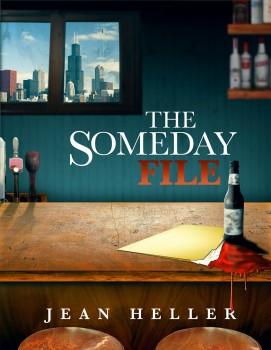 Jean Heller is no stranger to the world of investigative reporting, and in her latest thriller, THE SOMEDAY FILE, Jean’s knowledge and experience show. THE SOMEDAY FILE follows the sharp and spirited Deuce Mora, a columnist for The Chicago Journal, in her dangerous quest for justice as she unravels the truth behind a fifty-year-old crime. Well-plotted and tightly-written, with a fascinating glimpse into the sometimes grim reality of print journalism, THE SOMEDAY FILE is a thrilling read.

Jean graciously agreed to answer a few questions for The Big Thrill.

What can you tell us about THE SOMEDAY FILE that’s not on the back cover?

This is a book about obsession, guilt, obligation, and overcoming impossible odds under incredible pressure. Deuce Mora is a columnist for The Chicago Journal, a newspaper like most in the United States struggling against financial ruin in a digital world that seems to have left traditional newspapers in the gutter. She tries to interview an aging, low-level mobster who is living on beer, bourbon, and regret for the one mistake in his life that cost him everything. Deuce’s questions trigger a horrendous event that propels her into the nightmare of a fifty-year-old crime. To solve it, she must fight the cops, the Mob, politicians, prosecutors, and even her own editor. At the very least, Deuce’s quest will ruin her reputation and cost her job. Just as likely, it will cost her life.

As you note, The Chicago Journal is a newspaper struggling to survive in a digital world. You are well acquainted with journalism. In fact, you’ve had quite a career yourself, a career that includes eight Pulitzer Prize nominations. How have your experiences in the field of journalism impacted your novels? Deuce Mora’s character?

If I hadn’t been a journalist, I couldn’t have written the book. I was trained as a projects and an investigative reporter, which taught me legitimate ways to find elusive information. A retired New York City police detective said he was recommending the novel to young cops as a how-to on digging out information bad guys don’t want them to know. He told me my novel would be more effective than a police manual because the information is delivered in the context of a fascinating mystery, so young cops are more likely to remember it. And writers write what we know, or at least we should. I had so many incredible experiences as an investigative reporter I could populate a lifetime of thrillers. As for Deuce Mora, she’s younger than I am and taller than I am. But her sense of humor, her smartass responses to life, and her self-doubts are all mine.

Along the same lines, you made the transition from journalist to novelist in the 1990s when your first thrillers, Maximum Impact and Handyman, were published by St. Martin’s Press. What inspired you to make that leap to fiction? Why thrillers?

I didn’t made a transition as such. I was doing both at the same time, as well as doing freelance reviews of thrillers for several national newspapers. Thrillers were my read of choice. So when I got clobbered by my first idea for a novel, there seemed no recourse but to sit down and write it. And it had to be a thriller. That was the genre I’d known best my whole reading life.

THE SOMEDAY FILE deals with some tough emotional topics—regret and guilt for starters. Do you find there are certain themes you’re drawn to again and again?

Yes, and regret and guilt are two of those themes. They stem from a particularly famous story I broke years ago that changed the lives of several hundred people forever. Their first reaction was hurt and shock, neither of which they deserved, but both of which were inevitable. I remember sitting on a park bench in their little town square, tears running down my face, thinking, “I’ve ruined these people’s lives.” As it turned out, I hadn’t. I actually made their lives much better. But I exhumed a ghost that hangs over that town still, and I will never shake the feeling that I laid open scars from wounds these people never deserved.

THE SOMEDAY FILE is set in Chicago, a city that feels like another character in the book. Why did you choose Chicago as the setting?

You can’t write anything set in Chicago without Chicago becoming a character in the story. It’s that kind of place. When I first wrote THE SOMEDAY FILE, I was living in Florida, and the story was set in Florida. When I moved to Chicago eight years ago, I realized it was a much better setting for the story than anywhere in Florida, so I redid all the locations, redid all the research, and rewrote the entire book. I have had a lifelong love for Chicago. I couldn’t NOT choose it.

It seems like the process for writing fiction would differ significantly from that used to write an investigative piece. Is that true? When you’re writing a novel, do you outline the plot before you write a first draft, or do you allow the plot to develop during the writing process itself?

The two processes are somewhat different and somewhat similar. In a novel, of course, you know how it’s going to turn out. You rarely know that doing investigative reporting. In both cases, the job is information management, taking all those notes, and articles, and interviews on your desk and putting one word after another, hoping they are the right words in the right order.

I tried outlining my first novel, and I found it too confining. Stories and their characters often want to take off in surprising directions the writer never considered. Trying to stop them, to force them back into the rut of an outline, could cost you some of the best and most imaginative material in the book. So I try to have a pretty good fleshed-out notion in my head of where the story is going. And if it wants to detour now and then, so be it.

Where is your favorite place to write?

I love to sit under a big tree in Washington Park or on the Midway Plaisance in the Hyde Park neighborhood of Chicago, or in Ryan’s Woods nature preserve, or out in the country by a lake or a stream and work on my iPad. But that’s mostly during the conceptual phase. When I’m doing serious writing, I’m in my office, at my desk, and facing my computer, a spot where I won’t be bothered by a Canada goose looking for a handout and, hopefully, not by my dog barking at the UPS guy. Those, collectively, are the settings in which my right brain has the easiest time taking over and leading me down interesting paths of creativity.

What’s next for you? Is there another Deuce Mora novel in the works?

There is. It’s tentatively called The Genesis File and it’s totally different from the story behind THE SOMEDAY FILE. I’m still heavy into the planning phase. And it’s unfortunate timing because February and March are not the months I want to be sitting on the ground under a tree in a Chicago park. 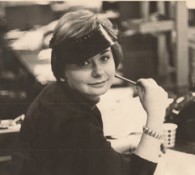 Most of Jean Heller’s career was as an investigative and projects reporter and editor in New York City, Washington, D.C. and St. Petersburg Florida. Her career as a novelist began in the 1990s with the publication of the thrillers, Maximum Impact and Handyman by St. Martin’s Press. Then life intervened and postponed her new book, The Someday File, to publication in late 2014. Heller has won the Worth Bingham Prize, the Polk Award, and is an eight-time Pulitzer Prize nominee.