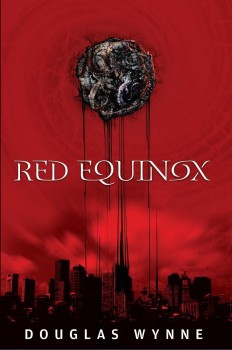 Lovecraftian Horror, the Elder Gods and anything Eldritch related is notoriously difficult to do well. The problem is that it is very difficult to get the right tone. Many of the attempts I have read fall into the fan fiction arena and, while there is nothing wrong with fan fiction, per se, the quality of Lovecraft’s writing makes most attempts pale in comparison. August Darleth and Robert E. Howard both got it right, and their stories stand proud in the list of wonderful Eldritch literature. And now we have another name. Douglas Wynne has managed quite a feat with RED EQUINOX.

The first thing that will strike you is the sense of place. Whether it is in a quiet church, in abandoned buildings, or on the city streets, the attention to detail of where the characters are is impressive. And it doesn’t get in the way of pace either. He takes time to set a scene, building a sense of impending terror, creepy imperfections that you notice out of the corner of your eye but can’t quite put your finger on—and all without losing the reader in a mire of long, unnecessary descriptions. I was hooked from the start.

I will not give too much away as regards the plot as one of the best things about the better tales of the Elder Gods is what isn’t blatantly stated. A ripple in still water is better than a gush in these tales, and the first part of the story is all about building tension. Of course, that changes later on.

The novel opens with Becca Philips’ journey to her grandmother’s funeral. Becca is an urban explorer and photographer. We are quickly introduced to a grandmother steeped in mystery and with a history of exploring the world’s cryptic past. Secrets abound about her grandmother but, with her death, these are lost.

Back in Boston, Becca visits an abandoned asylum and we are introduced to characters on both sides of the unfolding storyline. Cultists abound. There is a strange homeless man who is more than he seems and a creeping horror that is worming its way into our world.

If Becca can’t solve the mystery of her late grandmother’s gift, then the world will be lost to a sweeping horror beyond the realms of horror.

Douglas Wynne was kind enough to take some time out and answer a few questions to give us all a glimpse into what he has in store.

Can you give us some insights into your writing process? Do you have a ritual, do you plan out every detail, or do you see where the story leads?

I write whenever I can steal a little time between running a small home-based business with my wife and raising a boy who seems to always be out of school for snow days and vacations. Waking up early helps. I also find that writing first drafts on an Alphasmart Dana helps. It’s an old portable word processor I picked up on ebay for twenty bucks. Great keyboard and no web connectivity, so no distractions.

I don’t outline much because I like to follow where the story leads me, but I do write a lot of what if lists and a couple of plot projections that I may or may not stick to. One at around the one-third mark and another before the climax. Most of my notes are about what characters would most likely do next, given their motives and external pressures.

There is a huge Lovecraft influence in this story, but not a pastiche. You have managed to make the story unique. Was this a conscious effort? Have you always been an Eldritch fan?

I’ve been a Lovecraft fan ever since I picked up a paperback of The Lurking Fear and Other Stories as a teen. I feel more of an affinity for his cosmic horror than I do for some of the other traditional tropes like vampires and werewolves. There’s something almost psychedelic about the way his cosmology shatters the world view of his protagonists. Lovecraft’s stories are like bad paranoid acid trips at the intersection of horror, science fiction, and fantasy. So it’s a fun sandbox to play in. But in trying my hand at a Cthulhu Mythos novel, I also wanted to see if I could defy some of the standard tropes and write a character-driven thriller in that context. I wanted to pay homage while also telling a story with a near-future urban setting and a diverse cast. Striking a balance between Lovecraftian atmosphere and modern pacing was probably the hardest part.

As a reader I love printed books. I can focus better on a physical book and form more of a relationship with it, if that makes sense. Something about the weight of paper gives me a better feel for my progress through a story. But for certain kinds of books that challenge me, I do love the integrated dictionary and hi-lighting you get with an e-book. And as a writer, I’m very happy to be living in the age of the e-book revolution. It has given me a much broader reach. I publish with a small press, so the paper books are available to the readers who want them but you’re not going to stumble upon my latest at the supermarket checkout. You might, however, stumble across the e-book in a lot of different places and maybe take a chance on it for five bucks.

Ha-ha! Thanks. I don’t seek out urban ruins in my spare time, but I did want the story to have a semi-apocalyptic feel. There’s a big creep factor with abandoned asylums and derelict factories. I think that influence came mostly from my wife’s photography. Like my protagonist, Becca Philips, she has always been drawn to capturing the beauty in decay and in places where nature is reclaiming things.

RED EQUINOX is a Boston-based thriller about an urban explorer who gets caught between a terror cult that worships dark gods and a clandestine government agency. It has plenty of Easter eggs for fans of H. P. Lovecraft, but you don’t have to be familiar with his stories to enjoy it. Think of it as The Da Vinci Code meets Clive Barker against a terrorism backdrop.

I’m a slow but constant reader. Recent favorites include: The Bone Clocks by David Mitchell, Revival by Stephen King, The Scarlet Gospels by Clive Barker, and The Sea of Ash by Scott Thomas.

There’s definitely more to the world of RED EQUINOX that I want to explore. I left quite a few questions hanging about Becca’s family history and there are aspects of the government agency SPECTRA that I want to dig deeper into. Maybe other weird cases that they investigate. So I expect there will be sequels. But first I have a detective noir story with Tibetan demons tugging at my sleeve. We’ll see if I can find its voice.

RED EQUINOX is already available as in paper or e-book formats. If you like Lovecraft, you will find plenty to enjoy in this novel. If you are not familiar with Lovecraft, then I assume you are new to this planet so, welcome, and buy this book as an introduction to how to write a great book. This is a thriller—a novel of ordinary people forced into extraordinary situations; it is also a novel of cosmic horror beyond your imagining. Not bad for six dollars. And don’t forget your 3D glasses when you go out. 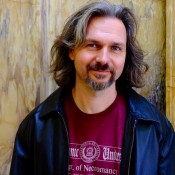 Douglas Wynne is the author of two previous novels: THE DEVIL OF ECHO LAKE and STEEL BREEZE. He lives in Massachusetts with his wife and son and a houseful of animals just a stone’s throw from H.P. Lovecraft’s fictional town of Arkham.