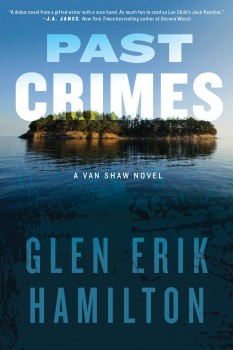 Glen Erik Hamilton’s debut thriller introduces readers to an exciting new protagonist, Van Shaw, whose military and thieving skills inevitably find him immersed in the high-stakes and violent underworld of ruthless criminals where right and wrong aren’t defined by the law.

In PAST CRIMES, former thief and now Army Ranger Shaw receives a call from his criminal grandfather Dono to come home to Seattle. But when he arrives at Dono’s house in the early hours of the morning, Van discovers the old burglar bleeding out on the floor from a gunshot to the head. With a lifetime of tough history between him and the old man, the battle-tested Ranger knows the cops will like him for the crime. Diving back into the illicit world he’d sworn to leave behind, Van reconnects with the ruthless felons who knew Dono best. Armed with his military and criminal skills, he follows a dangerous trail of clues that leads him deeper into Dono’s life—and closer to uncovering what drove his grandfather to reach out after years of silence.

The book already is creating buzz: Lee Child described it as “a home run off the first pitch,” and J.A. Jance called Hamilton “a gifted writer with a sure hand.”

Glen, first tell us what made you come to write this type of story.

The story evolved by blending my favourite aspects of mystery literature. I’m never quite sure what to call it. It’s definitely intended to be thrilling, with a lot of action scenes. It has many characters who are crooks tangled up in their various schemes, but it’s not strictly a crime thriller. And there’s a fair amount of good old-fashioned whodunit in the recipe. Add a dash of memoir, since we see Van at different ages as he’s growing up with Dono. A bouillabaisse thriller, perhaps? Mystery smorgasbord?

Speaking of Dono, tell us a little about the relationship between Van Shaw and his grandfather—how is that background an important element in the changing nature of Van Shaw?

Van came to live with his grandfather Dono—a career criminal—at six years old after his mother died. Dono and Van’s mother had a falling out, and Dono may be trying to make that right by giving his grandson a home. But of course, Dono’s approach to raising a child is a little outside the norm. Van grew up with a very skewed sense of right and wrong. As an adult and as a soldier, he’s worked hard to reset that moral compass.

What other key characters will we meet in the novel?

Van is returning to Seattle after ten years away, and reconnecting with his friends and his grandfather’s associates and accomplices. Chief among the latter group is Hollis, Dono’s best friend and a smuggler. Hollis is a good-humored fellow who knows the city’s ports and waterways like no one else. There are also other players who are, to put it mildly, not so jovial. Ondine Long is one of Seattle’s criminal brokers—setting up thefts and fencing the proceeds—and she is an extremely dangerous person, in her reach and her ruthlessness.

All of these people last saw Van as a teenager, and can barely recognize the Special Operations veteran he is today. There are also some hard feelings, since Van abruptly broke all ties when he left.

What are some of the other obstacles Van Shaw has to overcome?

Van is still an active-duty soldier, on leave. The standards for Rangers are uncompromising. His battalion leaders are not pleased to have one of their platoon sergeants as a person of interest in police investigations of violent crimes. Van’s Army career—which has offered him a home and purpose since he was eighteen—may be in serious jeopardy if he keeps turning over stones to see what creatures lie underneath.

Did you have the storyline/ending plotted out to some degree, or did you let the juices flow?

I started with scenes and images and reflections which I wanted in the story, and created a plot that allowed for those.

But that’s the short version. In truth, the novel went through a couple of serious revisions, and I adjusted my original plot quite a bit to suit. I have no problem killing my darlings. If an idea is any good, I trust it will resurface when it’s needed.

I’ll likely continue to plot my next few books, but I am getting more comfortable with surfing the story in between major points. Maybe someday I’ll be a pantser.

How did you choose the name Van Shaw? The title?

Like a lot of Irish families, different generations share a name. In this instance, Van is the namesake of his maternal grandfather Donovan, Dono for short. And Shaw came partly from Irish playwright George Bernard Shaw, partly from the late actor and writer Robert Shaw, who would have made a fine Dono, and partly because I just like the authoritative sound of it.

PAST CRIMES has a triple meaning. It’s a reference to an individual’s criminal record. It’s a nod towards sins that may have happened long ago. And it’s a question for Van to answer, in deciding whether he’s completely moved on from the brash young thief he once was.

Did you have or undertake any writing training before or as you were writing?

I took a couple of extension courses and a four-day mystery writing workshop, which led to the writing group with whom I still work today. That’s a weekly workshop of four students led by Jerrilyn Farmer, UCLA instructor and author of the superb Madeline Bean mysteries. It’s a very talented bunch, and properly hardnosed in pointing out what doesn’t work. (More on writing groups, below.)

Do you still work at another job or are you full time at writing now?

Yes and yes, if you’re defining full time by the number of hours spent. I have a corporate job during “regular” working hours, and I write at night and on weekends. With my second Van Shaw book nearing completion, that’s the grind right now, but it will relax some after the spring. I am blessed with a very loving and supportive family, who make sure that I eat and occasionally change my clothes.

Is there anything you’d recommend other debut authors do to help the process of getting that first novel into shape?

I think the very best thing a newer author can do is find a writing group with other talented people working on their own novels and stories. The reactions of those beta readers can be immensely valuable, even if you decide not to take every note or opinion to heart. Three other tips: Read the work out loud. Go to whatever conferences you can, for the energy as much as the learning. And invest in a professional proofreading just before you submit to agents.

How have you found the process of being absorbed into the publishing industry as an author?

Pressures certainly, but they’re great pressures to have. I’m very fortunate to have a superb agent and top-rank editors and publishing teams. All of them have taken the time to explain each step and nuance of the journey to the greenhorn stumbling around in their midst, spilling ink on the furniture.

The biggest eye-opener has been the time crunch of an annual schedule, which is pretty standard for thrillers. The next book is due to the publishers just as the last book is launching, with guest blog posts and touring and other hugely fun things. That’s a big spike in time commitment during those months, especially with a day job.

At the same time, it’s massively fulfilling. I started writing to see if I enjoyed it. When I did, I kept at it with the intent of finishing a book and telling a good story. Maybe my grandkids would read it one day. That was all. If I happened to publish that book or another someday, that would just be gravy. I didn’t realize how much I would enjoy the writing life, and want to make it my full-time profession, until I was fully into the thick of the publishing process. I wouldn’t trade it for any other job.

Did you have input into the cover designs? Is there a benefit in different designs between the US and UK, do you think?

Both houses did allow me quite a bit of input on the designs, which I really appreciated. But they didn’t need my help! I’m delighted with how the covers turned out, with vibrant colors and the title looming on the horizon.

Faber & Faber, my UK publisher, explained early on that different cover designs appeal to the UK markets than in the US market. That’s readily apparent if you walk through any bookstore in England or Ireland, for example. Cover layouts and pictures and formats have their own dialect, even if the language is the same (or at least comparable) across nations. I’m happy to trust the experts.

How has ITW helped in your development from aspiring novelist to fully-fledged author who has Lee Child as a referee?

ThrillerFest 2013 was the first convention I attended since starting to write seriously. The most obvious benefit to me was AgentFest, which I joined aiming to get a little experience pitching my nearly-finished manuscript, and wound up finding the best representation I could imagine. That’s my example of Luck equals Preparation meeting Opportunity.

But in addition to that big win, I was bowled over by how welcoming and generous the established (and often famous) authors of ITW were to all of us hopefuls. Not only in the classes and speeches, but simply in casual chats and advice. It’s a rare industry where you find professionals who have risen to the top through hard work and talent—it’s always both—who are also wise enough to understand that success is not a zero-sum game.   And they dedicate themselves to that principle by volunteering their time in creating and driving ITW. It really is a community.

The ITW Debut Authors Program is a key example, bringing each year’s class together online and during the conference to share ideas, offer support, and generally let debuting writers freak out as a group instead of all by our lonesomes.

That could probably serve as a tag line for ThrillerFest: “Don’t panic because you’re alone. It’s much more fun to panic together.”

A native of Seattle, Glen Erik Hamilton grew up aboard a sailboard and spent his youth finding trouble around the marinas and commercial docks and islands of the Pacific Northwest. He now lives in California with his family, and frequently returns to his hometown to soak up the rain.