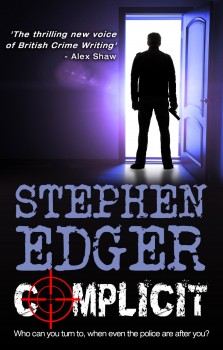 Stephen Edger started out like thousands of other authors today and self-published his first novel, Integration in 2010. By 2014, he’d not only had several other successful titles on Amazon, but was picked up by Endeavour Press, which published Crosshairs, the first in his The Cadre series.

The Big Thrill recently had a chance to catch up with Stephen to talk about his second book in the series, COMPLICIT .

COMPLICIT is your latest book, can you give us the inside scoop, not on the back cover?

COMPLICIT is the second book in The Cadre series and follows on from where the first book (Crosshairs) finished. It is now November 2014. The current Prime Minister has been executed by ‘The Cadre’ a secret organization fronted by the heads of industry (media, finance, security services etc.). They have plans to start a new war on the Middle East, with a view to driving forward a New World Order, with Britain at the head of the table. The trouble is: the man hired to kill the PM, Dylan Thomas, is a petty thief who has just ripped off a loan shark, drug dealer and the Russian Mafia, and is on the run. The group identify Dylan’s oldest friend, Connor Price, as their best chance of silencing Dylan before he reveals their plans.

It’s a political thriller with a ‘man against the world’ plot.

There is a debate between Character Driven vs. Plot Driven, which side do you stand on?

Definitely plot driven. I always start with a plot and build characters around it. You can write the strongest character, but if the plot is weak, you will upset your readers.

You have published over a dozen books, when someone meets you for the first time where do you suggest they start?

Of the eight novels I’ve published, three of them are part of a trilogy (Integration, Redemption and Shadow Line), three of them are standalone stories (Remorse, Snatched and Trespass) and the final two (Crosshairs and Complicit) will be part of a series when I publish the final part (Double Cross) in June this year. Despite this, the time periods for each story mirror the order they were published in. Although the main characters can vary from book to book, a number of the background characters (e.g. police officers) appear in several of the stories and I make references to previous stories in later books. I guess what I’m trying to say is people should start with my first book Integration and work forwards.

When you sit down to write a new novel, do you let the story grow organically, or do you have it pretty well mapped out?

Every author’s different, right? For me, I begin plotting the moment I have an idea. This usually starts whilst I am in the middle of writing a different story. I won’t start writing the new plot straight away, as I prefer to let it simmer gently in my subconscious whilst I focus on other things. When the original project is edited and on its way to my publishers I then start writing a skeleton of the new plot. Initially this is just free format text until I have the bulk of the idea written (usually about 10k words). I then carefully cut the story into chapters, developing themes and ideas that occur along the way, until I have a structured plot detailing salient points for each chapter and character. Once I am happy with the plot, I’m free to begin writing the first chapter. All in all, up to 6 months can pass from having the initial idea to actually starting writing the manuscript.

I have just completed the first draft of ‘Double Cross’, the follow-up to ‘Complicit’ and the final part of ‘The Cadre’ series. I will spend the next two months editing and proof-reading the manuscript with my team of helpers, before it’s published in June 2015. I’ve actually started jotting down ideas for my next book as well, which I aim to publish in December. It will be a Christmas-themed whodunit about a child abductor whom the media refer to as ‘The Ghost of Christmas Past’. I am very, very excited about fleshing out the plot and writing it! I’m also starting to develop an idea for a short story that I’ll look to write somewhere in between. 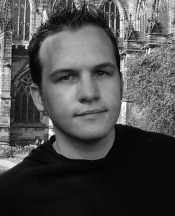 Stephen Edger is one of Britain’s up and coming new crime writers. He is the author of 8 novels and 4 short stories. He is published by Endeavour Press. Stephen was born in Darlington in NE England but was raised in London. He moved to Southampton to study Law at University but after graduation decided his future lay outside of a courtroom. Stephen works in finance and has used his experiences of the industry in each of his books. Stephen loves to read thrillers, in particular British thrillers. He cites Simon Kernick, Stephen Leather and Mark Billingham as influences though is also a fan of Dan Brown, John Grisham and James Ellroy.