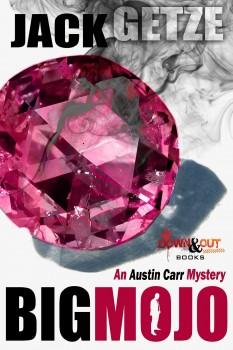 I write funny, or screwball, mysteries, but I scared myself writing BIG MOJO, the third novel in my Austin Carr series. Maybe the book really is a thriller. What happened, a supporting character—Angelina “Mama Bones” Bonacelli—took over as my favorite writing voice, and that is not supposed to happen. Austin Carr is my chosen speaker, the man whose strange ideas about life found voice inside the devil on my shoulder. Austin’s the star of the show. He talks in first person. It’s his series. Says so on the cover of every book.

Looking back, examining Mama Bones’ creation and early appearances, it’s hard to say when and how the change-over occurred. Austin did all the talking in book one, Big Numbers. Mama Bones tickled my funny bone when she showed up in book two, Big Money, by playing out a story I’d heard about one of my wife’s aunts who cheated at a church-sponsored bingo game. In my fictional version of this family story, the cheater—Mama Bones—was the mother of Austin’s boss and tougher than week-old tomato pie. She was hard-edged, owned a sarcastic sense of humor like Austin, but she also had a gigantic heart. And though no scenes were written from Mama Bones’ point of view in either book one or two, I knew she’d be back in Austin’s life.

Why? Because I enjoy making other people laugh, telling stories that crack people up, but I enjoy stories even more when it’s me doing the laughing. Pecking away at that tiny computer keyboard, I like to giggle and hoot while I’m making this stuff up, and I’ve discovered through the comments section of Goodreads and Amazon that if the scene, characters, or dialogue make me chuckle or laugh, chances are excellent my fans will enjoy the work as well. Good thing, eh? Or maybe that’s why they’re my fans.

Another reason I knew I’d be coming back to Mama Bones was the wealth of tales I had about my wife’s old aunts and uncles, people now dead. The stories were safe to tell now and way too interesting for this writer to ignore. Thus, I have Mama Bones growing up in the summer resort of Asbury Park, where her parents leased special soda-making equipment and illegal betting cards to venders on the Jersey shore, a business begun in the 1920s by her grandparents. Mama Bones’ grandma and grandpa were also political organizers, collecting cash from new Italian immigrants and boardwalk businesses, then delivering the bag money and the local Italian vote to whichever party paid them most.

I wanted to use this background, so in BIG MOJO, the third and current series offering, I gave Mama Bones dozens of scenes from her point of view. Like I said, I’m not exactly sure when, but somewhere during the writing of her dialogue and thoughts, she became my favorite character. She was funny, tough, and eccentric enough to keep me entertained, verbally abusing her son for being outsmarted by Austin; wondering if she should go for the Sig Sauer 9mm under her pillow; or creating a magic potion to dunk Austin in shark-filled waters.

Yes, I love people that make me laugh, and Mama Bones did the job. I tried her out for a bigger role in BIG MOJO and she jumped on it—the whole relationship between her and Austin being funny because the two of them always try to out smart-ass each other. In addition to the humor, though, what gives their interplay a tough edge is underlying tension over Mama Bones’ beloved son Vic, Austin’s partner. Austin can’t be sure of Mama Bones’ intentions—or loyalties. One of BIG MOJO’s climactic scenes is probably a good example. I don’t want to give the ending of book three away, but in book four, coming out later this year, Austin briefly recalls what happens in BIG MOJO: “And while it is true Mama Bones saved my life several times, the most recent occasion involved only a last-minute change of heart, her outlaw hand on a switch that could have ground me into mincemeat.”

I can’t wait to find out what she does next. 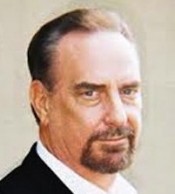 Former Los Angeles Times reporter Jack Getze is Fiction Editor for Anthony nominated Spinetingler Magazine. Through the Los Angeles Times/Washington Post News Syndicate, his news and feature stories have been published in over five-hundred newspapers and periodicals worldwide. His screwball mysteries, BIG NUMBERS and BIG MONEY, were first published by Hilliard Harris in 2007 and 2008. His short stories have appeared in A Twist of Noir and Beat to a Pulp. He is an Active Member of Mystery Writers of America’s New York Chapter.