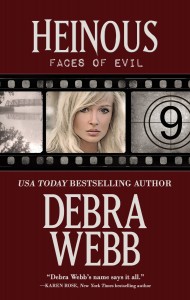 The body count is rising. The serial killer obsessed with Birmingham’s Deputy Chief Jess Harris is getting closer, and he knows Jess’s secret. Can she protect the child she carries and the people she loves from Eric Spears and his followers?The body farm discovered in a small Alabama town has many buried secrets. Is the truth about Jess’s past buried there too? Will learning what really happened to her mother and father help Jess stop the killer determined to have her? Only three more levels in the Faces of Evil series! Don’t miss this one!

HEINOUS is available from Amazon.

DEBRA WEBB, born in Alabama, wrote her first story at age nine and her first romance at thirteen. It wasn’t until she spent three years working for the military behind the Iron Curtain—and a five-year stint with NASA—that she realized her true calling. A collision course between suspense and romance was set. Since then she has penned more than100 novels including her internationally bestselling Colby Agency series. Her debut romantic thriller series, the Faces of Evil, propelled Debra to the top of the bestselling charts for an unparalleled twenty-four weeks and garnered critical acclaim from reviewers and readers alike. Don’t miss a single installment of this fascinating and chilling twelve-book series!Visit Debra at www.thefacesofevil.com or at www.debrawebb.com. You can write to Debra at PO Box 12485, Huntsville, AL, 35815.

Countdown to Casablanca by Dan Pollock