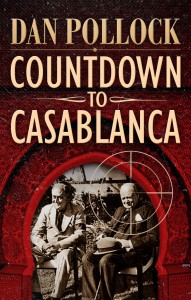 A ruthless Axis agent code-named Sirocco and an American linguist turned amateur spy find themselves on a collision course with destiny in romantic and exotic World War II Casablanca.Roosevelt and Churchill are coming to Casablanca. So are Eisenhower and Patton, Montgomery and DeGaulle. For ten days, the entire Allied High Command will be gathered in one place—to plan the invasion of Fortress Europe.Learning of the secret conference through an Abwehr intercept, Hitler launches an audacious counterstrike — with one demonic blow he will take out the assembled Allied chieftains and turn the tide of war back in favor of the Reich.

“Dan Pollock is a writer of talent and drive” ~Len Deighton

COUNTDOWN TO CASABLANCA is available from Amazon.

Dan Pollock was born in New York City to a family of writers and grew up in Laguna Beach, California. A former syndicate editor with the Los Angeles Times, Pollock is the author of four thriller novels in addition to Countdown to Casablanca–Lair of the Fox, Duel of Assassins, Orinoco (originally published as Pursuit Into Darkness) and The Running Boy–and a specially commissioned “logistics” thriller, Precipice.With his wife, Constance, he has edited and published three literary, inspirational volumes: The Book of Uncommon Prayer; Gospel: The Life of Jesus as Told by the World’s Great Writers; and Visions of the Afterlife: Heaven, Hell and Revelation as Viewed by the World’s Great Writers.The Pollocks live in Southern California with their two children.

The Sculptor by Gina Fava

Heinous (The Faces of Evil) by Debra Webb