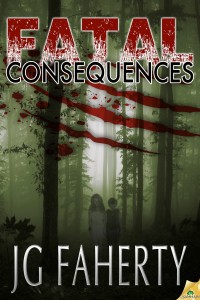 When a bear attacks his family during a camping trip. Alec Winter runs and hides. When he returns, his children are dead and his wife badly injured. He carries her out of the woods, and everyone believes he’s a hero. But their deaths haunt him in his dreams, hauntings that become real on the anniversary of their deaths. Now their spirits are out for revenge, not only against Alec but against everyone who helped build him up as a hero. In the end, Alec sacrifices himself to end their escalating violence, but for Alec, death isn’t the end of his pain.

“When I read FATAL CONSEQUENCES, I was reminded again of just how good a writer J.G. Faherty is.  This is a lean, fast-paced thriller that had me engrossed from the first page to the last.  Highly recommended!” –John R. Little, author of LITTLE BY LITTLE, MIRANDA, and THE MEMORY TREE“FATAL CONSEQUENCES is a really chilling ghost story. Weird with an unexpected twist.  Faherty writes like a dream.  I was propelled through the story by his suspenseful writing and finished it in one sitting.” – Erica Manfred, co-author, THE DEMON OF BROWNSVILLE ROAD, Berkley, 2014

FATAL CONSEQUENCES is available from Amazon and Samhain Publishing.

JG Faherty is a Bram Stoker Award® and ITW Thriller Award nominee and the author of four novels, seven novellas, and more than 50 short stories. He writes adult and YA horror/sci-fi/fantasy, and his works range from quiet, dark suspense to over-the-top comic gruesomeness. He enjoys urban exploring, photography, classic B-movies, good wine, and pumpkin beer. As a child, his favorite playground was a 17th-century cemetery, which many people feel explains a lot. His personal motto is “Photobombing people since 1979!” You can follow him at www.twitter.com/jgfaherty, www.facebook.com/jgfaherty, http://about.me/jgfaherty, andwww.jgfaherty.com.

Meanwhile, Back at the Ranch by Elliott Capon